The Three Lions suffered a heartbreaking 2-1 defeat to France in the quarter-finals of the 2022 World Cup at the Al Bayt stadium.

The Blues opened the scoring in controversial fashion with the long-range stunner of Aurélien Tchouameni and Harry Kane leveled things from the penalty spot before Olivier Giroud extended his goalscoring record to 53 goals.

The heroic England captain had the chance to equalize once more with another spot-kick but he unfortunately missed the target.

It meant our boys were on the next plane home – but not before showing off their class off the pitch this morning.

England showered hotel staff with gifts as they departed from Qatar to return home. 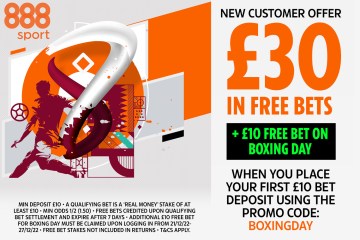 The players handed out signed shirts and hugged the workers, who in turn said south gateThe 25-man team of “had made them feel like princes” and had become “like family”.

Midfield feeling Jude Bellingham urged fans to “stick with us” while he was going to chat in front of the hotel and sign autographs.

But Southgate says he is “reviewing” his future with FA chiefs, adding it was normal procedure after major tournaments.

However, these thoughts and the painful memories of yesterday will have to be put aside after our valiant heroes return to normal life tonight.

Bellingham put on a brave face as he gave a thumbs up as he left Birmingham Airport, while Phil Foden was happy to pose for photos after landing at Manchester Airport.

Meanwhile, Kyle Walker looked much more low-key as he drove back to Man City with his head bowed in the backseat of his chauffeur-driven motor.

Southgate, 52, is now debating whether he should remain in charge.

He said: “After each tournament we sat down, reviewed and reflected.

“So we need some time to make sure everyone is making the right decisions.”

“Every time I’ve finished these tournaments I’ve needed time to make the right decisions because emotionally you go through so many different feelings.”

But it was our brave captain Kane, author of his penalty in the 84th minute, who took responsibility for the World Cup exit and he says the result “is going to hurt for a while”.

He said: “It’s a really tough night to be.

“I’m gutted, the squad is gutted. We were convinced we could achieve something special at this World Cup, but it came down to small details.

“I thought the night we had the best chances and the best spells in the game.

“It comes down to execution. As captain, I take it on the chin and the responsibility for missing the penalty.

“It’s hard to say for sure, but I can be proud of the group, proud of each other for what we have done.

“It will hurt for a while, but we will dust ourselves off to prepare for the future.”