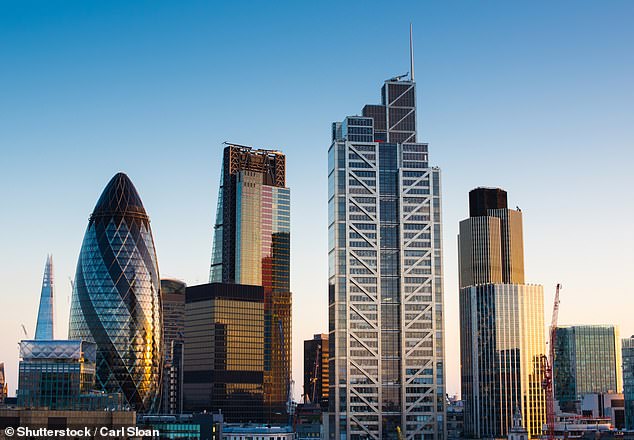 Boycotts and sanctions are having a dramatic impact on equity markets, even though Russia is only the 11th largest economy in the world with a total output of £1.3 trillion.

The resulting uncertainty has hit London shares hard, and at almost 10 per cent off their peak the FTSE 100 is in correction territory.

Conditions were considered turbulent enough for precision engineer Spectris to call off its all-British £1.8billion bid for competitor Oxford Instruments.

Market turmoil: Uncertainty over how Russian sanctions will hit the global economy has hit London shares hard, and at almost 10% off their peak the FTSE 100 is in correction territory

It would be a pity if the failure to get this deal done saw either party fall victim to private equity.

When markets are as unsettled as they have become as a result of the Ukraine war, there is no safe space.

The only comfort is to look further back at equity markets, which show that after every correction or bear market, shares always bounce back more strongly.

That hasn’t stopped investors getting collywobbles. British investors pulled £604million out of equity funds in the final three days of February, according to data from settlement service Calastone.

There needs to be an increasing recognition by regulators that the promise of cash redemptions by funds is falling short too often. It will come as no surprise that Liontrust Russia, once on the Hargreaves Lansdown recommended list, has suspended dealings.

Citywire reports that Fidelity held an exceptional meeting at the weekend and as a consequence closed four classes of shares in the L&G Emerging Government Bond US Index fund with exposures to Russia, Ukraine and Belarus.

Erratic conditions have also caused Janus Henderson to close its UK property fund a sector where rule changes on cash withdrawals are on the way because of the stickiness of real estate investment.

All of this is a sharp reminder of legendary investor Warren Buffett’s aphorism: ‘When the tide goes out you see who has been swimming naked.’

War in Ukraine, surging energy bills and the threat of higher interest rates and taxes. None of these factors deter Britain’s booming housing market.

Latest data from the Halifax shows house prices climbed by 10.8 per cent in the year to February 2022 the biggest jump since June 2007 – shortly before Northern Rock blew up.

It was thought that when the stamp duty holiday was canceled on March 31 last year, the froth would come out of the residential market. If anything it has speeded up, with the 0.5 per cent surge in the Halifax index in January the eighth consecutive month of gains.

From the parallel Nationwide data there is some evidence of a slight slowing in the past three months, but it is very attempted.

Factors from the Covid era are still driving the bubble. In spite of two rises in the Bank of England’s key interest rate to 0.5 per cent, it is still historically low and there are great mortgage deals still around.

Possibly some buyers, fearing that inflation will send mortgage costs much higher, are hurrying up purchases on fixed rates before they move higher.

For those first-time buyers, at the foot of the ladder, an average price of £278,123 will look intimidating.

It could freeze out a generation from being part of the Thatcherite dream of a property owning democracy.

No one wants to see a stagnant economy or falling real incomes.

But unless there is a burst of new housebuilding, it may be the only way of restoring some balance to a bonkers market.

The willingness of the great and the good to risk their reputations by sticking close to Russian oligarchs has to be seen to be believed.

In spite of the incessant Russia bombardment of civilian targets in Ukraine, former Tory energy minister Greg Barker has hung onto his job as chairman of Russian metals group EN+ until he couldn’t withstand the opprobrium any longer.

It would be good to see him disgorge a chunk of his fat pay and bonuses, £3million in 2020 alone, to the refugee cause.

That is if he hasn’t done so already!

Some links in this article may be affiliate links. If you click on them we may earn a small commission. That helps us fund This Is Money, and keep it free to use. We do not write articles to promote products. We do not allow any commercial relationship to affect our editorial independence.