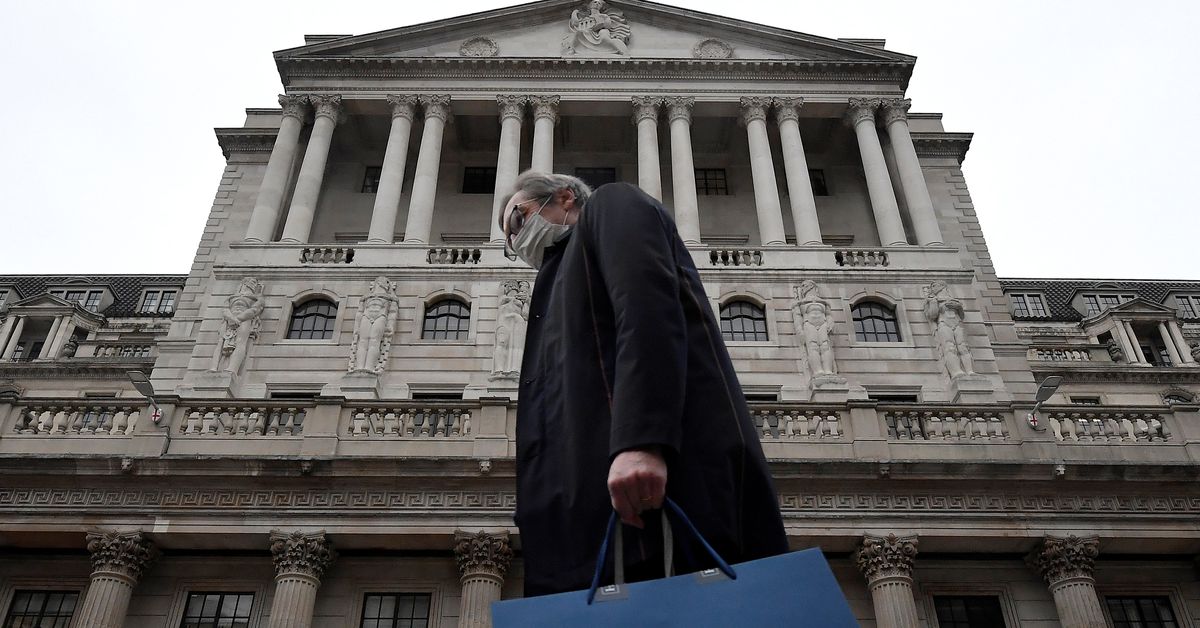 A man wearing a protective face mask walks past the Bank of England (BoE), after the BoE became the first major world’s central bank to raise rates since the coronavirus disease (COVID-19) pandemic, in London, Britain, December 16, 2021 REUTERS/Toby Melville

LONDON, March 11 (Reuters) – The Bank of England looks set to lift interest rates to 0.75% on Thursday, its third rate rise in a row as it seeks to tame a dramatic surge in inflation that has been intensified by Russia’s invasion of Ukraine .

A quarter-point rate hike on March 17 would return the cost of borrowing to where it was before Britain was hit by COVID-19 two years ago, but is unlikely to be the BoE’s last.

The BoE was the first major central bank to push up rates since the start of the pandemic with an increase to 0.25% in December. Alongside February’s rise to 0.5% it also began to slowly reverse its 895 billion pounds ($1.17 trillion) of bond purchases.

The US Federal Reserve is expected to start to raise rates on Wednesday, and the European Central Bank this week announced it would stop its bond purchase stimulus in the summer.

Last month, before Ukraine was invaded, the BoE forecast consumer price inflation would peak at about 7.25% in April, when household energy tariffs are due to rise by more than half.

Now economists think inflation might exceed 8% later this year and reach its highest since the early 1980s. The cost of natural gas used to heat most British homes is 60% higher than before February’s meeting.

Higher rates will not stop the short-term rise in inflation, and the surge in energy prices will squeeze British living standards, ultimately pulling down inflation.

But the BoE views raising rates now as necessary to reduce the risk that high inflation gets baked into longer-term expectations — a costly problem the last time inflation got this high in Britain in the early 1990s.

“I think it’s really tough for the Bank at the moment to get this right,” said James Smith, a former BoE economist who is now research director at the Resolution Foundation think tank.

“If they go too slowly, you get the inflation shock. If they go too fast, it chokes off recovery. And then there is a recession risk on top of that.”

Investors are pricing in the BoE raising rates to 2% by the end of 2022.

Most economists think this is too aggressive – the BoE’s own forecasts suggested inflation in 2-3 years’ time would undershoot its 2% target if Bank Rate neared 1.5% in 2023.

Although Britain’s economy regained its pre-crisis size in November, before the Omicron wave of coronavirus cases, output has not caught up with lost growth like in the United States.

Some economists such as Capital Economics’ Paul Dales nevertheless think Britain’s tight labor market — job vacancies hit a record high in January — could push the BoE to raise rates as high as 2% by next year.

Policymakers were spooked last month by an in-house survey which showed businesses expected to raise pay by 5% this year.

Four of the BoE’s nine Monetary Policy Committee members voted for a half-point rate rise in February, to 0.75% rather than 0.5% — bigger than any hike the central bank has enacted since gaining operational independence in 1997.

Although soaring energy prices are likely to slow growth this year, Dales said this was unlikely to change most MPC members’ view on the need for further tightening.

A BoE survey on Friday showed public inflation expectations for the next 12 months had jumped to the highest since 2008, though the rise in medium-term expectations — which some MPC members think are more significant — was less marked.

Financial markets are pricing in the highest inflation expectations in at least a decade.