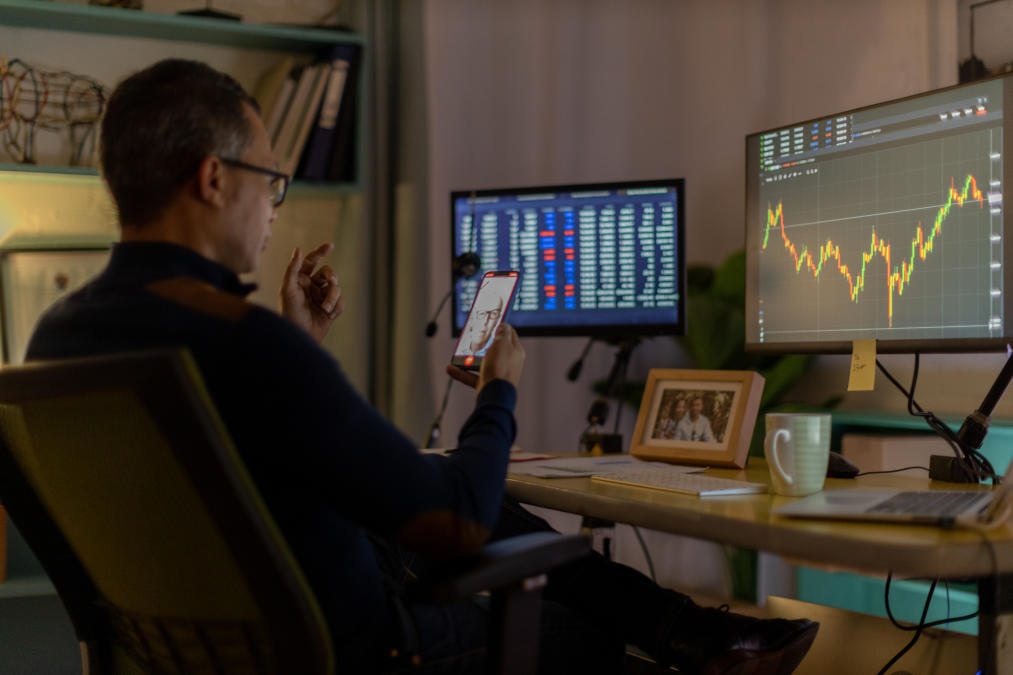 Cryptocurrency’s breakthrough from the financial fringes to the mainstream has been characterized by major investors like Paul TudorJones — and some companies like Microstrategy (MSTR) and Tesla (TSLA) — dipping their toes into Bitcoin (BTC-USD). Even Apple (AAPL) CEO Tim Cook is getting in on the action.

Yet some financial advisors and wealth managers appear to be struggling over how to adapt to the new era, in a sector defined by head-spinning price action, still-evolving regulation, and rising fraud.

A recent survey from fintech company eMoney Advisor found about 38% of US respondents say their investments are managed by a financial advisor, and that 43% said they invest in cryptocurrencies. The data underscores how less than half are handling out digital token advice, even as the sector becomes an increasingly hot topic in retail and institutional investing.

Separately, a January survey by crypto investment manager Bitwise found a staggering 94% of advisors surveyed have gotten crypto-related questions from clients. Yet a slim 15% actually allocated money to digital tokens.

Nevertheless, Bitwise CIO Matt Hougan said the sector was “approaching the tipping point for the widespread adoption of crypto by financial advisors. Two years ago, just 6% of advisors were allocating to crypto in client accounts; today it’s 15% and our survey suggests it will be nearly 30% by year-end.”

Crypto’s notorious volatility, in addition to the lack of a Bitcoin exchange traded fund (ETF) specifically tied to its spot price, may have something to do with it.

A spot ETF has yet to be approved by the Securities and Exchange Commission, even though a few new futures-linked funds have found a receptive audience. Several financial advisors Yahoo Finance spoke with recently all suggested a spot ETF would be the ideal vehicle for clients.

Yet Ric Edelman, founder of The Digital Asset Council of Financial Professionals (DACFP) thinks some advisors are making a mistake waiting for a spot Bitcoin fund. Having first discovered Bitcoin in 2012, Edelman argues that advisors can easily allocate 1-3% of their client portfolios to cryptocurrency-linked assets.

Obviously, crypto is huge but we’re just not at all trained in this space. Even if you don’t want to recommend it as an investment, we should at least know enough to be able to discuss it.Bonnie Maize, financial advisor

Waiting for a spot ETF is “outdated and incorrect thinking,” the author and financial expert told Yahoo Finance recently. Sitting it out in the near term could have negative implications for client returns, he suggested.

With a few exceptions, most crypto assets aren’t concretely regulated by Federal agencies like the SEC and the Financial Industry Regulatory Authority (FINRA) — a hot topic that’s shaping the current debate over crypto regulation. That makes a number of advisors reluctant to recommend digital currencies to clients, especially with instances of fraud and mischief on the rise.

However, there’s evidence that some advisors are trying to get smart on crypto. Bitwise’s survey found that some are paying for a certificate with the Digital Assets Council for Financial Professionals, an organization Edelman founded in 2018.

‘Maybe, if they ask’

Among them is Bonnie Maize, a Rossville, Kansas “stay at home mom” turned financial advisor. She pointed out that besides avoiding crypto altogether, there’s no clear framework for how an advisor should address the sector.

“Obviously, crypto is huge but we’re just not at all trained in this space,” Maize told Yahoo Finance. “Even if you don’t want to recommend it as an investment, we should at least know enough to be able to discuss it,” she added.

Carl von dem Bussche, Jr. another advisor, has also earned a certificate through Edelman’s organization after some of his clients admitted to already having invested into the asset class .

Von dem Bussche — who manages the Nashville branch of Financial Guidance Group, a family-owned financial services company — admitted his opinion of cryptocurrencies has shifted from “heck no, that sounds like it’s made up of nothing” to “maybe, if they ask .”

Yet crypto’s risk profile remains well above what he typically offers clients.

“For our clients who want cryptocurrency and whose risk profiles suggest that it could be appropriate for their portfolios, I want to see a spot Bitcoin ETF approved by the SEC before we make anything happen,” Von dem Bussche insisted.

Catherine Valega, an advisor and founder of Green Bee Advisory, is also earning the digital asset certificate. She told Yahoo Finance though she’s always curious to learn what comes next in the investing world, especially digital tokens, most client conversations usually causes her to worry.

“There’s so much hype around cryptocurrency. I have no problem if people want to trade their funny money but before that many of them need to cover basic financial planning bases like allocating their 401Ks, and other retirement accounts,” Valega told Yahoo Finance.

Eric Balchunas, a Bloomberg Intelligence senior ETF analyst and avid tracker of the crypto ETF trend said the dynamic could put US advisors between “a rock and a hard place.”

“The problem is if you have clients who want something and you’re refusing to give it to them, they might leave,” Balchunas told Yahoo Finance.

Read the latest cryptocurrency and bitcoin news from Yahoo Finance