Written by admin
Cryptocurrency prices are climbing after Russia’s ruble sank to another record low and Moscow was hit with new sanctions.

Dogecoin rose nearly 6 per cent to about 13 cents apiece.

Virtual currencies are traditionally seen as a risky bet, but as conventional assets experience curbs or greater volatility because of geopolitical tensions, some analysts believe they will gain more traction.

Investors appear to be “trying to get out of the ruble” due to its “drastic devaluation after all the sanctions,” said Bendik Schei, head of research at Arcane.

Schei added that more people were switching to Tether rather than bitcoin.

While bitcoin is the world’s most valuable cryptocurrency, Tether is known as a “stablecoin” since it is pegged to the US dollar.

“This is where they find the most comfort at the moment,” Schei said of investors.

“Under the current market conditions, I’m not surprised to see investors, at least those in Russia, seeking stablecoins …This is about saving their funds, not investing.”

Over the past week, Tether has largely held firm at about US$1 (AU$1.37) apiece.

The scramble came as the ruble plunged Monday, trading at 104 to the US dollar. It was little changed early on Tuesday.

Western powers have frozen the assets of Russia’s central bank with the aim of making it harder for Russia to mitigate the effect of sanctions on some of its biggest lenders and other companies.

The steps are meant to prevent Russia from accessing a “rainy day fund” that officials said Moscow had been expecting to rely upon during the invasion of Ukraine.

Instead of using the reserves to buffer a plummeting ruble, Russia will no longer be able to access many of the funds it keeps in US dollars.

Apart from offering investors a relatively safe haven, cryptocurrencies could offer Russians a way of evading sanctions, according to some experts.

US and EU sanctions rely heavily on banks to enforce rules. If a sanctioned business or individual wants to make a transaction denominated in traditional currencies such as dollars or euros, it’s the bank’s responsibility to flag and block those transactions.

But digital currencies operate outside the realm of standard global banking, with transactions recorded on a public ledger known as blockchain. 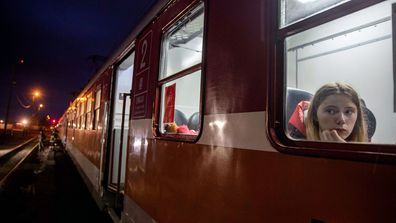