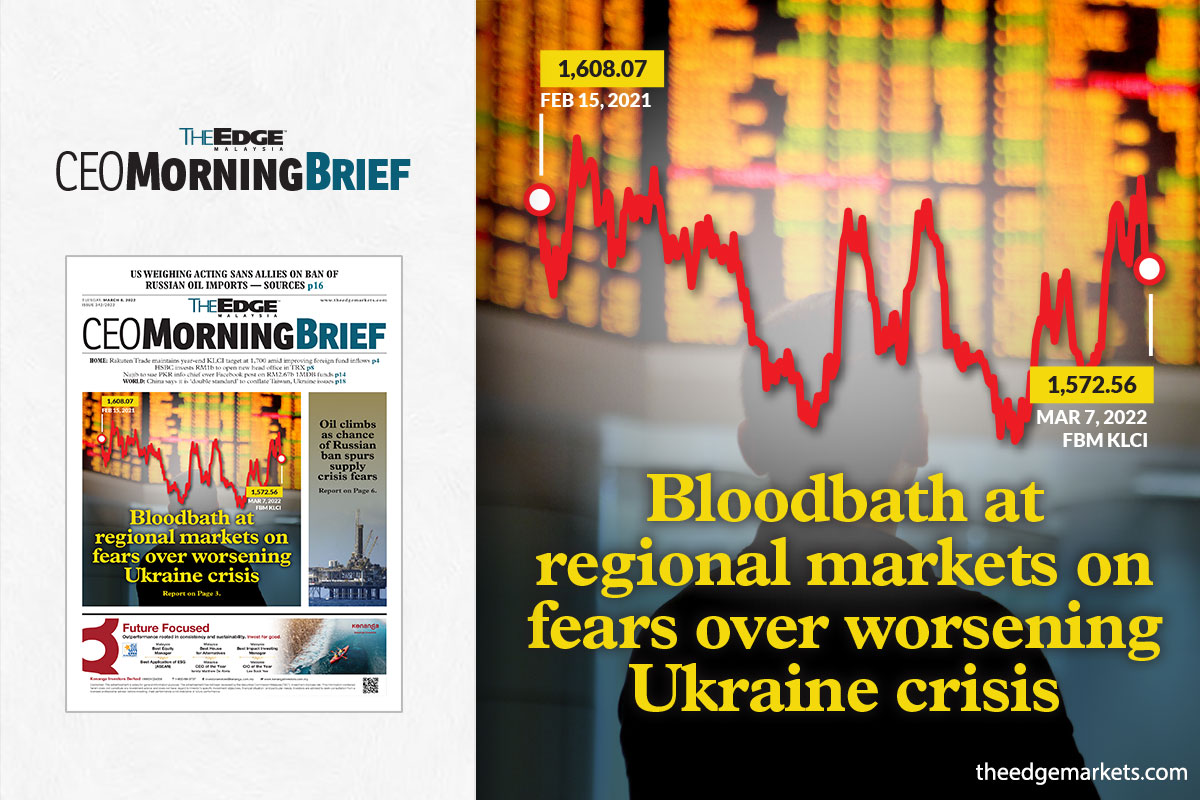 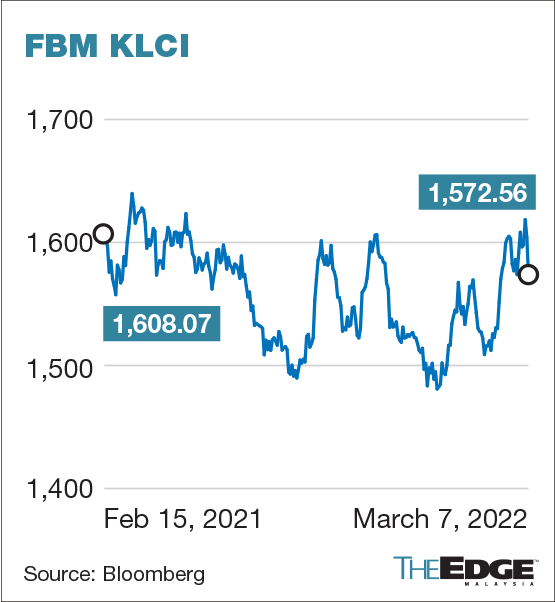 The index has erased its gains since mid-February 2022 — in line with decline across regional markets — as tensions mount from the Russia-Ukraine conflict, while the US and its European allies mull a ban on Russian oil, ahead of the Federal Open Market Committee (FOMC) meeting on March 15 and 16.

The decline in the FBM KLCI was also significantly higher than the 0.77% drop on Feb 24 when Russia started its invasion of Ukraine.

The consensus view for Monday’s decline is due to the knee-jerk reaction to the potential embargo on Russian oil by the US government and its European allies, which sent Brent crude oil prices skyrocketing to trade near US$130 a barrel. This prompted Berkshire Hathaway to increase its stake in Occidental Petroleum to 9.8%, valued at US$5.1 billion (equivalent to RM21.31 billion).

Analysts The Edge spoke to generally believe that the market’s underperformance was driven by negative sentiment unrelated to the fundamentals which remains intact, with Rakuten Trade Sdn Bhd head of equity sales Vincent Lau highlighting Malaysia’s potential to be a beneficiary of the market chaos due to the correlation between the economy and uptrends in the commodities and technology/semiconductor markets.

Asked on what should investors watch out for in the near term, Hong Leong Investment Bank (HLIB) Research’s head of retail research Ng Jun Sheng highlighted the need to observe developments in the Russia-Ukraine conflict, impact of the potential ban on Russian oil, as well as the FOMC meeting scheduled for March 16.

Lau added that despite the market having priced in 25 to 50 basis-point interest rate hikes, the market sentiment is dependent on the US Fed’s view of the economic outlook, as well as the outcome of ongoing negotiations between Russia and Ukraine for a ceasefire.

“However, I don’t think we are going to get into global stagflation; it is just a knee-jerk reaction. I think Malaysia is able to weather it,” Imran said.

Malacca Securities’ senior analyst Kenneth Leong on the other hand, pointed out that the selling pressure was inevitable, as it is a global phenomenon, despite increasing foreign funds inflow to the Malaysian markets.

On the technical front, the first major support level for the benchmark index will be the 200-day moving average of 1,545 points. If broken, the index might trend lower towards its year-to-date low of 1,503 points, according to Ng.

Leong noted that the FBM KLCI’s next support levels will be at 1,550 points and 1,530 points, highlighting that the index had already fallen below its near-term support of 1,570 on Monday.

Looking ahead, Ng said: “The market sentiment of KLCI is already affected by external risks; for the next few days, its movement is expected to be choppy”.

Meanwhile, Imran thinks that there is a possibility for bargain hunting in the KLCI in the next few days.