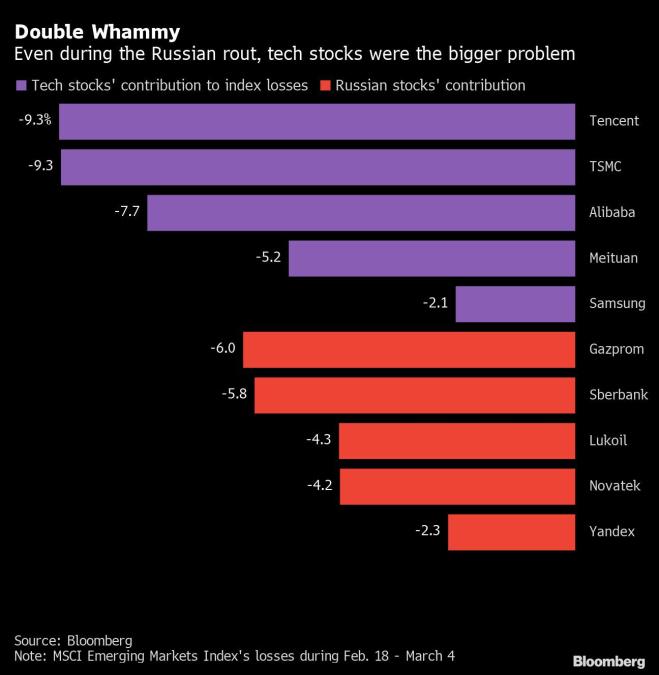 (Bloomberg) — As traders grapple with the breakout of war in Europe, the prospect of a new regulatory crackdown in China is getting lost in the headlines, but potentially poses a larger risk to emerging-market assets.

A meltdown in Chinese technology shares after authorities told food-delivery platforms to cut their fees last month has fueled bigger losses for MSCI Inc.’s Emerging Markets Index than even Russia’s invasion of Ukraine. That’s because China accounts for about 30% of the gauge, while Russia is just over 1.5%. Traders are now concerned that this week’s meeting of the National People’s Congress could precede a renewed crackdown — even as opening remarks from Premier Li Keqiang emphasized that venture capital still has a role to play.

“China has more contagion effect than Russia,” said Brendan Mckenna, a strategist at Wells Fargo in New York. “When a shock occurs in China, just about all of EM reacts. A shock in Russia usually just spills over to regional Eastern Europe.”

The impact of Chinese stock losses on the broader emerging-market gauge may get even more pronounced. MSCI is among the benchmark providers kicking “uninvestable” Russian equities out as Moscow’s stock exchange remains shuttered, sanctions escalate and liquidity dries up. As of March 9, the country’s assets will be removed from the gauge entirely.

That leaves stock traders to focus on how President Xi Jinping’s government is working to rein in the country’s most powerful corporations. In just the past two weeks, China has told banks to report their financial exposure to Ant Group Co. and set out demands to cap fees by ride-hailing and food-delivery platforms.

While emerging-market stocks get savaged by the war in Ukraine, tech shares affected by China’s clampdowns are hurting even more. The Hang Seng Tech Index’s has plunged 20% in dollar terms since the advent of new regulation in mid-February, double the losses witnessed in the broader developing-nation benchmark. That’s sent the tech gauge’s ratio relative to emerging markets to the lowest level since 2019. A group of consumer stocks including Alibaba Group and Meituan is one of the worst drags on the index, data compiled by Bloomberg show.

“The environment is still uncertain in terms of regulatory framework and we would need more clarity to assess the impact on equities,” said Leonardo Pellendini, a strategist at Bank Julius Baer.

Traders are bracing for further takeaways from the National People’s Congress, China’s biggest political event before a twice-a-decade party leadership reshuffle slated for later this year. So far, policy makers have set an aggressive economic growth target of about 5.5%, adopted measures to keep housing prices stable and vowed to address social issues such as human trafficking. Premier Li also described the prevention of “unregulated expansion of capital” as one of last year’s achievements.

The reemergence of regulatory risk in China is a headache for money managers including JPMorgan Chase & Co. and Mobius Capital Partners, who had expected the threat to cool in 2022. They anticipated Chinese equities would rally on the country’s easy monetary policy and economic revival.

But some investors are still buying discounted shares with a focus on longer-term growth potential.

“Any selling at this point isn’t really a rational move due to any worsening expectations on the regulatory environment — those trading on that may have acted long ago,” said Cai Dian, a fund manager at Beijing Eastern Smart Rock Asset Management.

That said, “the shares are still ultra sensitive and tend to overreact to negatives, such as the delivery fee reduction news. That kind of short-term trading is amplifying volatility.”

Here’s what to watch in emerging markets this week: