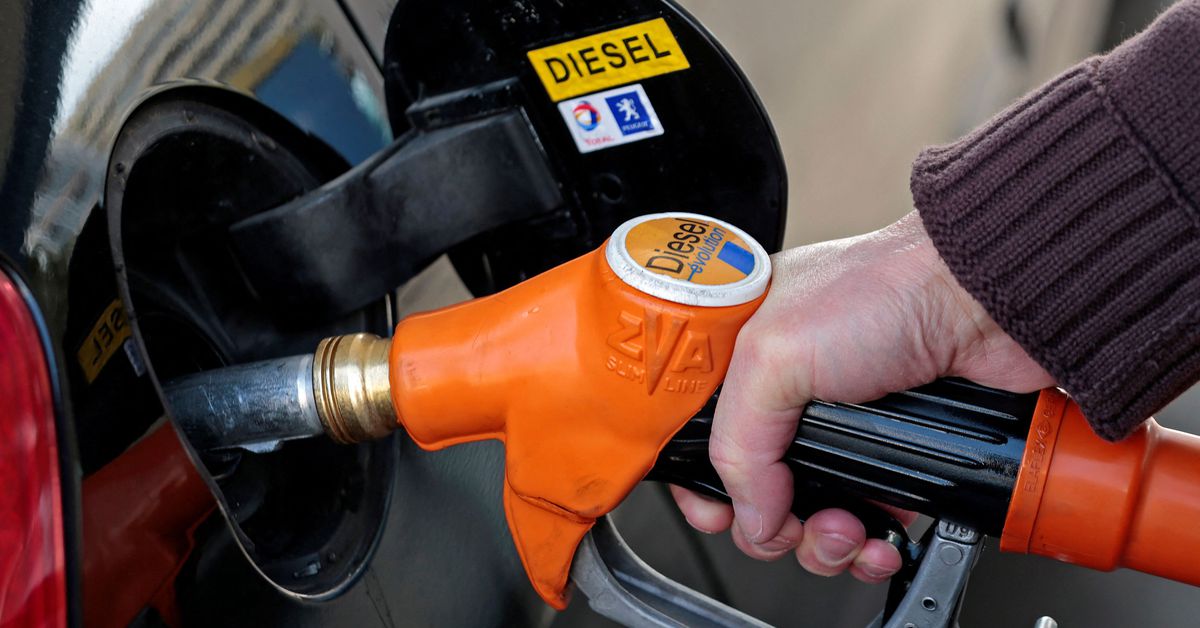 A customer fills-up his car with diesel at a gas station in Nice March 4, 2013. REUTERS/Eric Gaillard/

LONDON, March 11 (Reuters) – Global stocks of diesel and other middle distillates have fallen to the lowest seasonal level since 2008, when similar shortages of these transport and industrial fuels helped to propel oil prices to a record high.

Distillate fuel oil inventories in the United States are 30 million barrels (21%) below the pre-pandemic five-year seasonal average and at the lowest level since 2005, the US Energy Information Administration said.

Stocks in Europe are 35 million barrels (8%) below the pre-pandemic five-year average at the lowest level since 2008, Euroilstock, which compiles inventory data on behalf of the European Union, found.

And middle distillate stocks in Singapore are 4 million barrels (32%) below the pre-pandemic five-year average and also at the lowest since 2008, according to the country’s Ministry of Trade and Industry.

Combined inventories across the three locations have fallen by 110 million barrels compared with the same point last year, as consumption has persistently outpaced production (https://tmsnrt.rs/37aVdIf).

Demand for diesel and other middle distillates is highly geared to the economic cycle since they are mainly used in freight transportation, manufacturing, farming, mining and oil and gas extraction.

The rapid rebound in economic activity after the first wave of the pandemic and associated lockdowns, and its focus on diesel-intensive manufacturing and freight, has boosted use of the fuel.

At the same time, refiners have restrained crude processing to deplete the excess stocks that built up during the coronavirus recession and adapt to lower demand from passenger airlines for jet fuel.

But the continued depletion of distillate inventories has become unsustainable.

Distillate production will have to be raised above consumption for a period to rebuild stocks to a more comfortable level.

There is some scope for refiners to boost distillate output by increasing crude processing back to pre-pandemic rates but that will transform a shortage of distillate into a shortage of crude oil.

Pressure to stabilize and rebuild distillate inventories will cause refiners’ crude consumption to accelerate later this year and into 2023.

But the global crude market is already exceptionally tight and the extra crude demand will cause it to tighten further.

The global distillate shortage is threatening to create a severe spike in oil prices just as it did in the first half of 2008.

“If something cannot go on forever, it will stop,” economist Herbert Stein, who had been US President Richard Nixon’s chief economic adviser, said in 1986.

In this case, the only question is how the depletion of distillate stocks will be turned around. Faster production. Slow consumption. Or both.

Either the oil industry must find a way to boost crude and distillate supplies or the economic expansion must slow to ease diesel demand.

John Kemp is a Reuters market analyst. The views expressed are his own.

Opinions expressed are those of the author. They do not reflect the views of Reuters News, which, under the Trust Principles, is committed to integrity, independence, and freedom from bias.