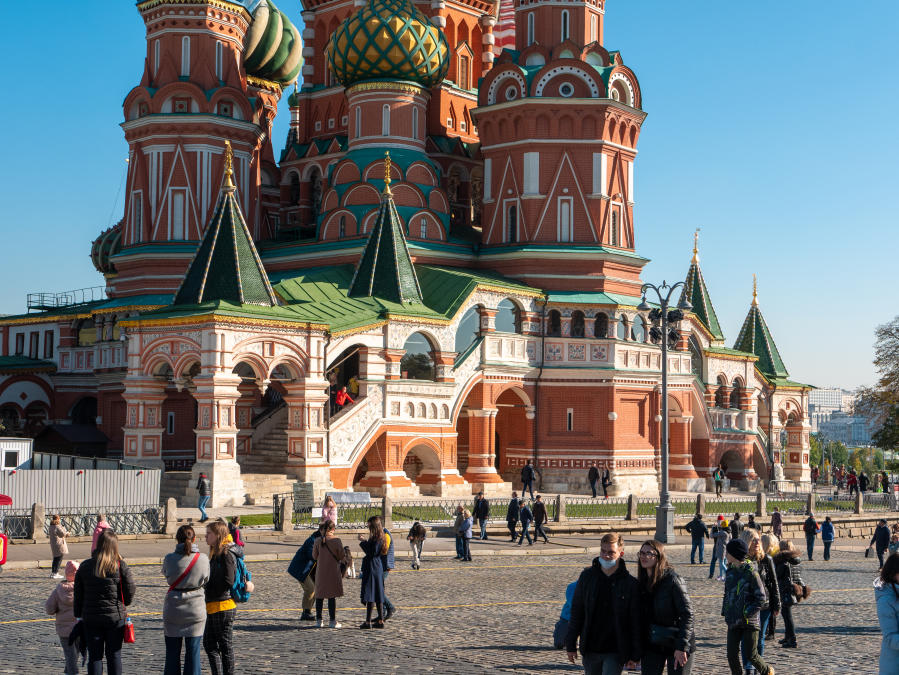 (Bloomberg) —Netflix, TikTok, Samsung and credit card operators have joined the lengthening list of businesses cutting ties with Russia or reviewing their operations in the country as reputational and financial risks mount.

International sanctions, the closure of airspace and transports links due to the war, and the financial restrictions on SWIFT and capital controls have made it difficult if not impossible for many companies to supply parts, make payments and deliver goods to and from Russia. Added to that, the potential international consumer backlash against any company perceived as helping Vladimir Putin’s regime means that the exodus of corporations from Russia has become a stampede.

The rout reverses three decades of investment there by foreign businesses after the Soviet Union broke apart in 1991, especially in energy. Here are some of the biggest companies that have begun to unravel their connections:

Russia’s largest foreign investor, BP Plc, led the way with its surprise announcement on Feb. 27 that it would exit its 20% stake in state-controlled Rosneft, a move that could result in a US$25 billion write-off and cut the company’s global oil and gas production by a third.

Shell Plc followed, citing Russia’s “senseless act of military aggression.” The company said it would end partnerships with state-controlled Gazprom, including the Sakhalin-II liquefied natural gas facility and its involvement in the Nord Stream 2 pipeline project, which Germany blocked last week. Both projects are worth about US$3 billion. Exxon Mobil Corp. said it would “discontinue” its Sakhalin-1 operations.

Equinor ASA, Norway’s state-owned energy giant, said will start withdrawing from its joint ventures in Russia, worth about US$1.2 billion. In parallel, Norway’s sovereign wealth fund, the world’s largest, said it’s freezing Russian assets worth about US$2.8 billion and will come up with a plan to exit by March 15.

Visa Inc. and Mastercard Inc. said on Saturday they are suspending operations in Russia. In separate statements that arrived within minutes of each other, Visa cited “Russia’s unprovoked invasion of Ukraine, and the unacceptable events that we have witnessed,” while Mastercard referred to the “unprecedented nature of the current conflict and the uncertain economic environment.”

Ukrainian President Volodymyr Zelenskiy had called on the companies to halt all business in Russia during a video call with US lawmakers. Each gets about 4% of its net revenue from business linked to Russia. American Express followed on Sunday.

Some critics argue that the steps aren’t enough. While the companies said any transactions initiated with their cards issued in Russia will no longer work outside the country and cards issued outside of Russia won’t work at Russian merchants or ATMs, consumers inside Russia who have a locally issued card can still pay for goods and services there.

Two of the Big Four auditors PricewaterhouseCoopers LLP and KPMG LLP also said on Sunday they would cut ties with Russian businesses.

In the space of a week, most of the world’s biggest carmakers including General Motors Co., Ford Motor Co., Volkswagen AG, and Toyota Motor Corp. announced they would halt shipments to Russia or idle plants in the country. Truckmakers Volvo AB and Daimler Truck Holding AG also halted business activities there.

However, the automaker with the most to lose, Renault SA, has remained.

The French company’s majority control of AvtoVaz, the Soviet-era maker of Ladas, and reliance on Russia for about 12% of its revenue have unnerved investors and Renault has lost more than a third of its market value in two weeks. “Renault has promised to abide by sanctions,” Gabriel Attal, the French government spokesman, said Thursday on France Info radio.

Samsung Electronics Co., the leading smartphone seller in Russia with more than 30% of the market, suspended exports to the country of all its products. Samsung said it will donate US$6 million to humanitarian efforts in the region, including US$1 million in consumer electronics products.

Before the announcement, Mykhailo Fedorov, who serves as Ukraine’s vice prime minister and oversees digital operations, posted a letter on his Twitter account to Samsung vice chairman Han Jong-hee, urging the Korean tech giant to temporarily cease supplying services and products to Russia. “We need your support — in 2022, modern technology is perhaps the best answer to the tanks, multiple rocket launchers and missiles targeting residential neighborhoods, kindergartens, and hospitals,” he wrote.

Microsoft on Friday condemned Russia’s “unjustified, unprovoked and unlawful invasion” of Ukraine and said it’s suspending all new sales of products and services in Russia. Apple Inc. has halted sales of iPhones and started limiting Apple Pay services and other popular products in Russia, and removed the RT News and Sputnik News applications from App Stores outside the country. HP Inc., the largest supplier of PCs to Russia, has stopped exports to the country as has Intel Corp.

Nike Inc. is one of several consumer goods companies that have cited logistical problems as a reason for suspending sales in Russia. Spanish fashion retailer Inditex SA, which has has 502 stores in Russia including 86 Zara outlets, is also temporarily closing all its shops in Russia and halting online sales, saying it “cannot guarantee the continuity of operations and trading conditions.”

Danone Chief Executive Officer Antoine de Saint-Affrique was among CEOs and chairmen of some of France’s biggest companies who met with Emmanuel Macron on Friday, according to Le Figaro. The French president urged them not to leave Russia hastily, and in any case not without consulting the government, the newspaper reported.

Netflix Inc. is shutting down its operations in Russia and said no new customers will be able to sign up, though it’s unclear what will happen with existing accounts.

Netflix has fewer than one million customers in Russia and has been operating in the country through a joint venture with National Media Group. The streaming giant said previously it won’t be carrying required Russian news channels on its local-language service in the country and has paused all projects and acquisitions from Russia, including four programs in production.

Meanwhile other platforms, including TikTok, are suspending or closing services because of Russia’s new “fake news” law aimed at silencing dissent and limiting information about the invasion of Ukraine.

“We have no choice but to suspend livestreaming and new content to our video service while we review the safety implications of this law,” TikTok announced in a series of tweets. “The safety of our employees and our users remain our highest priority.”

The company, owned by China-based ByteDance Ltd., said its in-app messaging service would not be affected.

On Friday, the Russian government said it was blocking access to Meta Platform Inc.’s Facebook as part of the crackdown. Hours after the announcement, Meta said it would pause all advertising in the nation and would stop selling ads to Russian businesses.

Baker McKenzie said last week it was reviewing its operations in Russia and will sever ties with several Russian clients in order to comply with sanctions. The Chicago-headquartered firm’s clients include Russia’s finance ministry and VTB, Russia’s second largest bank.

London-based Linklaters said in a statement it was “reviewing all of the firm’s Russia-related work.” KPMG LLP’s UK chief, Jonathan Holt, said the firm will cut ties with certain clients subjected to the recent wave of sanctions against Russia.

Even as more companies sever ties with Russia, criticism is rising of banks and corporations that are perceived as profiting from the war or not doing enough to punish Putin’s invasion.

US Senator Elizabeth Warren, a vocal critic of Wall Street, said some banks are “undermining“sanctions by snapping up Russian corporate bonds and suggesting clients buy the nations’ assets on the cheap.

In a statement released late Friday, Warren called out market makers JPMorgan Chase & Co. and Goldman Sachs Group Inc. following a Bloomberg report that the two banks had been purchasing beaten-down bonds. Banks routinely scoop up debt because clients ask them to, or because they expect to find ready buyers.

JPMorgan analysts also published a note recommending that investors boost holdings of Russian-linked debt to take advantage of a “recovery play” stemming from the sell-off that accompanied the country’s invasion of Ukraine.

“Giant Wall Street banks like JPMorgan and Goldman Sachs never miss out on an opportunity to get richer even if it means capitalizing on Russia’s invasion of Ukraine and undermining sanctions placed on Russian businesses,” said Warren, a Massachusetts Democrat.

Representatives for Goldman Sachs and JPMorgan declined to comment on the Bloomberg report that they had been buying up Russian bonds.

Last week, McKinsey & Co.’s global managing partner Bob Sternfels took to LinkedIn to condemn the Russian invasion of Ukraine and declare that the firm will no longer do business with any government entity in Russia. But the consultancy’s most senior executive in Ukraine called on companies to go further, and begin, where possible, shutting “offices and outlets” in the country, where McKinsey has operated for nearly 30 years.

The founder of Fast Retailing, which owns fashion giant Uniqlo, said the company wouldn’t be withdrawing from Russia, according to the Nikkei. “Clothes are essential items in daily life,” Tadashi Yanai, Fast Retailing’s chairman and CEO, reportedly said. “Russians have a right to live as well.”

Representatives for Fast Retailing in Tokyo didn’t immediately respond to inquiries from Bloomberg News. The company operated 50 stores in Russia, as of Feb. 28. Fast said on March 4 that it would donate US$10 million and 200,000 items of clothing to the United Nations High Commissioner for Refugees to support those fleeing Ukraine.