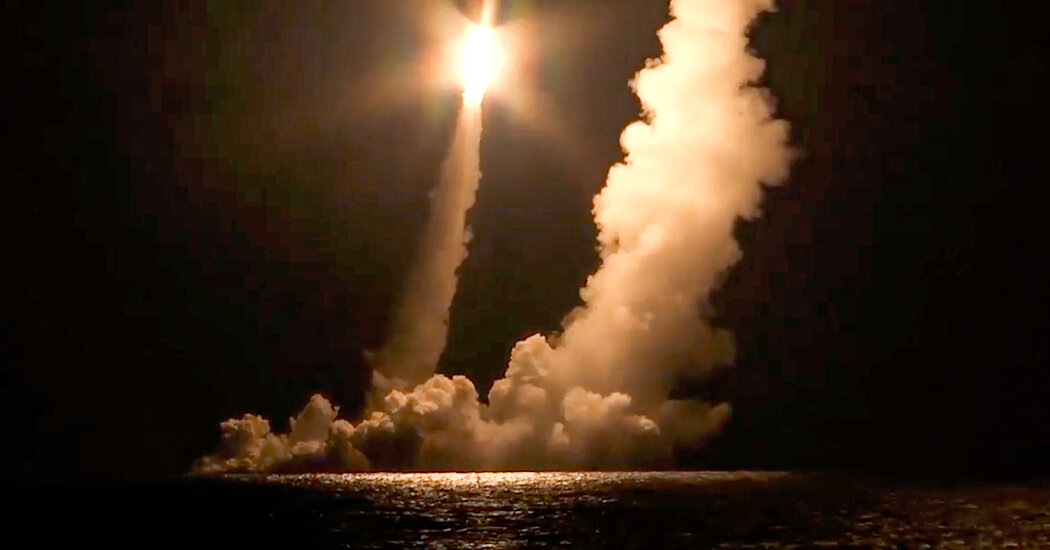 ‘Nuclear war is a risk in my research’

A turbulent start to the week saw stock markets fall around the world, with the S&P 500 recording its sharpest daily decline since October 2020, while the Nasdaq and Germany’s benchmark index slipped into bear markets. Investors and analysts are assessing the latest developments in the war in Ukraine, revising their forecasts to take account of everything from commodity supply shortages (more on that below) to President Vladimir Putin of Russia putting his nuclear forces on alert.

Peter Berezin, a strategist at BCA Research, an investment advisory firm based in Montreal, made waves with a recent note about market positioning when, as he put it, the odds of a civilization-ending nuclear war in the coming year have risen to 10 pierce. Despite the rising “risk of Armageddon,” he wrote, investors should “stay bullish on stocks.”

DealBook spoke with Berezin, who was an economist at Goldman Sachs before joining BCA, for more details on his eye-catching investment thesis. The conversation has been edited and condensed.

What has been the reaction to the report?

It has generally been positive. To the extent that there have been some negative reactions, they have generally stemmed either from a misunderstanding of my argument or from the feeling that the tone of the report was too alarmist.

People have said it was needlessly alarmist. But look at the pandemic. We should have been more alarmist. I am not trying to write something that is sensational. But I don’t think you should pull punches. I bought some potassium iodide. So on a personal level, if I am going to do that, then I shouldn’t ignore that nuclear war is a risk in my research. To not acknowledge it would be hypocritical.

So what were you trying to say, exactly?

What I wasn’t trying to say was that stocks were going to go up if there is a nuclear war. Obviously, they will go down. The point is that everything else will go down, too.

So, you have this odd asymmetric risk from an investment point of view. One scenario is that the conflict is contained and reaches some equilibrium. In that situation, stocks go up. If the threat doesn’t dissipate, well, you probably won’t be around to witness the aftermath. From a personal perspective, you should care about whether there is a nuclear war. But from a financial perspective, since you can’t hedge, the best advice is to position for a freakout and buy stocks when they are down.

But isn’t there a middle ground, in which we don’t have a nuclear war but the global economy still suffers?

Down the road, that’s the future that I envision. We are going to be moving to a world where the world is less globalized. And globalism is deflationary. So we are at an inflection point for bond yields and inflation, and going to move into inflationary environments.

If that’s the case, why would you be bullish on stocks?

What’s moving stocks now is the conflict and investors grappling with how this conflict will be resolved. Look at commodity prices. Markets are assuming that oil prices will come back down. That’s the right conclusion. Prices will revert.

Bed Bath & Beyond soars after an activist arrives. Shares in the retailer jumped 34 percent yesterday after Ryan Cohen, the co-founder of Chewy, unveiled a stake and pushed for changes in strategy. That led to more than $50 million in paper earnings for Cohen, whose investment in GameStop helped stoke meme-stock mania.

New York City schools drop their mask mandates. Students were allowed to go mask-free as Mayor Eric Adams took a big step to return the city to normal, though some students still felt uncomfortable doing so. In other pandemic news, Puerto Rico eased its mask mandate, while Florida said it would recommend against giving healthy children coronavirus vaccines.

Apple prepares to unveil new gadgets. The tech giant will host a product event today, which is largely expected to be centered around product upgrades. Expect a new iPad Air and a lower-priced iPhone SE, and potentially new laptops and desktop computers.

The latest on the Russia-Ukraine war

The Russia-Ukraine War and the Global Economy

Gas supplies. Europe gets nearly 40 percent of its natural gas from Russia, and it is likely to be walloped with higher heating bills. Natural gas reserves are running lowand European leaders have accused Russia’s president, Vladimir V. Putin, of reducing supplies to gain a political edge.

Shortages of essential metals. Tea price of palladium, used in automotive exhaust systems and mobile phones, has been soaring amid fears that Russia, the world’s largest exporter of the metal, could be cut off from global markets. The price of nickel, another key Russian export, has also been rising.

Financial turbulence. Global banks are bracing for the effects of sanctions intended to restrict Russia’s access to foreign capital and limit its ability to process payments in dollars, euros and other currencies crucial for trade. Banks are also on alert for retaliatory cyberattacks by Russia.

“There is a recognition that the idea of ​​a competitive labor market is a fiction. This is a sea change in economics.”

— Ben Harris, an assistant Treasury secretary in the office of economic policy, on the Biden administration’s new report about the state of labor market competition. The recent narrative is that a tight labor market is giving workers leverage, but the report argues that the deck is still stacked against workers.

Extraordinary moves in the market for nickel, where prices rose by 70 percent yesterday and at one point doubled in early trading today, led the London Metal Exchange to halt trading in the commodity “on orderly market grounds.” Russia accounts for about a tenth of the world’s supply of nickel, particularly the variety used in electric vehicle batteries.

“Fear of shortages is triggering panic buying,” an analyst told Reuters. The effects that the war in Ukraine and sanctions against Russia are having on energy markets have grabbed the headlines, but reliance on other Russian commodities, like nickel, has put global supply chains under pressure. Many of these crucial minerals are used in electric cars, solar panels and other green-energy applications.

The world can’t afford to spurn Russian minerals, said Lewis Black, who heads Almonty Industries, a tungsten mining and exploration company based in Canada. Tungsten, which is increasingly in demand for tech products, is on the Biden administration’s newly updated “critical mineral list,” along with nickel, palladium, aluminum and others. Russia has the world’s second-largest reserves of tungsten, behind China. For some time, companies have relied on Russian mines in an effort to minimize dependence on China — and they now find themselves in a bind, Black told DealBook.

Cutting off direct purchases of Russian minerals won’t stop them coming via China, Black said: “Even though the material may not leave Russia in the traditional routes coming over the border into Europe, the consensus within the sector is that it will find its way still into Europe.” Russia is “one of the principal suppliers of raw materials globally,” Black said, so “it’s not a question of just saying, ‘We can’t buy it anymore.’ There’s nothing to replace it with.”

Diversifying the supply chain for critical minerals is a Biden administration priority. Last month, days before Russia’s invasion of Ukraine, the White House announced a series of investments designed to jump-start American mineral mining and address US dependence on “foreign sources and adversarial nations.” But this isn’t a quick process, and despite high prices for the commodities it sells, the energy-intensive mining industry may not be able to ramp up production to meet demand because of soaring prices for oil and gas, further restricting supplies.

Best of the rest

We’d like your feedback! Please email thoughts and suggestions to dealbook@nytimes.com.