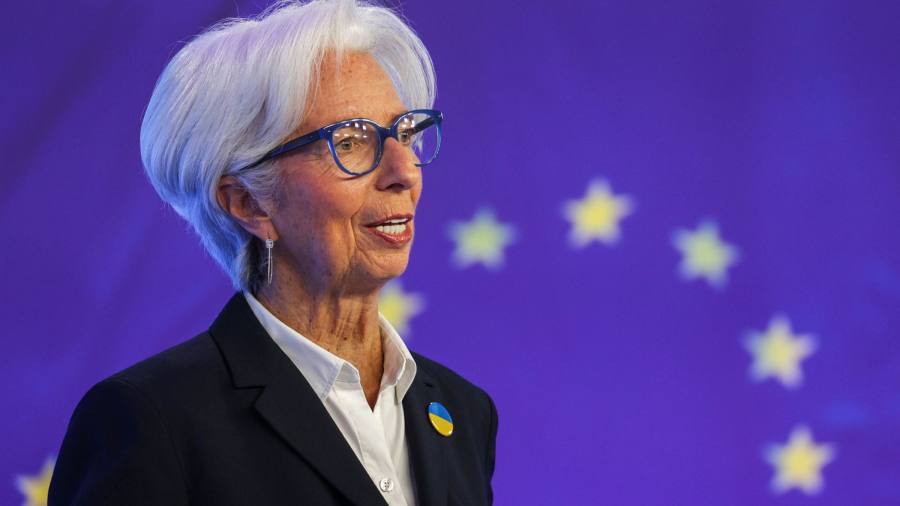 One of the first big market bets to emerge from the Russian invasion of Ukraine was that central banks would take fright.

AT massive rally in government bonds – in the UK’s case, the biggest since the EU referendum in 2016 – was a clear sign that investors thought they would take this opportunity to slow or delay the process of jacking up interest rates.

Not so fast. On Thursday, the European Central Bank concluded its regular two-day rate setting meeting and indicated it would stick to its hawkish path. All things are relative – this was hawkish only for a central bank that has its main interest rate wedged below zero per cent. But it scaled back its bond-buying stimulus scheme and said net purchases could stop in the third quarter if the war in Ukraine keeps bumping up inflation expectations. The first rate rise in over a decade could still come this year.

Sporting a bright brooch in the colors of the Ukrainian flag, ECB president Christine Lagarde said the war would, of course, have a “material impact on economic activity”. Naturally, the path from here depends on how the economic data turn out.

But all the market can hear is “keep calm and carry on”. The euro popped higher. Bond prices fell.

“President Lagarde was at pains to highlight the uncertainty that the war in Ukraine presented and characterized the tapering change as an increase in optionality for the ECB in both directions; something that fails to pass the smell test in our opinion,” said Andrew Mulliner, head of global aggregate at Janus Henderson Investors. “This ECB seems to be for a reduction of accommodative policy at all costs.”

With the US Federal Reserve due to make its own pronouncement on rates next week, and US inflation standing close to 8 per cent, this is a message worth heeding.

“I feel like we are somewhat trapped here,” says Greg Peters, chief investment officer at PGIM Fixed Income. Either geopolitical risk intensifies further, shoving commodity prices even higher and nourishing the hawks on rate-setting committees, or geopolitics miraculously calm down, the global economy springs back and the hawks stay in control. Either way, the hawks win. “The market is not thinking about this properly at all,” he says.

This is still likely to be a bigger drag on US markets than the war in Ukraine, which has, so far at least, been a very local affair.

At the epicentre, Russian markets have, of course, been fried to a crisp. Moving westward, the damage is also clear. Central banks in Poland, the Czech Republic and Hungary have been forced in to a combination of interest rate rises and interventions to support their currencies. This was to try to tame the likely inflationary impact of weaker currencies combined with pricier commodities.

Beyond that, very conspicuously, European markets have suffered a much heavier blow than the US. Outflows from European equity funds have smashed records. This is not an indiscriminate flight to safety.

In stocks, the German market dropped by a hefty 15 per cent from the start of Russia’s invasion to March 7. US stocks, meanwhile, dropped heavily on day one and then sprang back. They have just ended this week around the same level as they were when the invasion began.

“You can draw a correlation map between proximity to the conflict areas and market impact,” says Kasper Elmgreen, head of equities at Amundi in Dublin. In some cases, this might generate opportunities to pick up bargains. “When markets panic, they get irrational, and opportunities emerge. The human bias is not to do anything. But you have to act on the opportunities in front of you.”

So where does this all leave professional investors? It is not supposed to be an easy job, but they are now up against the prospect of sky-high inflation while there is a pullback or even reversal in economic growth. And there is the risk that the defenestration of Russia from the global financial system could throw out unexpected stink bombs.

“Russia might not matter as an economy but it matters as part of supply chains,” Elmgreen says. “There could be some trouble brewing that we have not thought about.”

Oil, oil and gas – two of Russia’s main exports beyond human misery – have already rocketed in price. Some European companies are likely to buckle under the strain. Worldwide trading in nickel, another Russian specialty, has effectively ground to halt after one trader’s bet against a rise in price blow up in spectacular fashion. Wheat prices have soared.

Generally speaking, in comparison to, say, March 2020, when Covid (remember that?) briefly pulled the rug from under the entire financial system, markets have functioned pretty normally through the shock of war. But it is a brave investor who assumes this will continue.

“I feel a little better about this stuff,” says Peters at PGIM, noting that central banks’ enhancements to the global financial-market plumbing brought in during the Covid shock are still available to avert disasters. “But we’re watching carefully. An accident is almost expected at this point.”