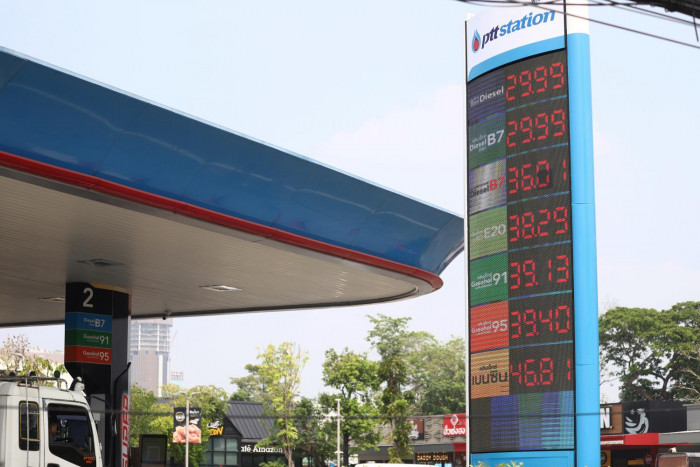 A sign displays high fuel prices at a PTT station in Bangkok on Wednesday as global oil prices are forecast to soar to more than $130 a barrel. (Photo: Nutthawat Wicheanbut)

Manufacturers will struggle to maintain their goods prices for another 3-6 months amid the Russia-Ukraine war, but they insist the government continue to cap diesel prices at below 30 baht a litre, says the Federation of Thai Industries (FTI).

Global oil prices threaten to soar to more than US$130 a barrel, while some raw materials have become more expensive, putting pressure on factories to increase the prices of their goods.

Businesses, especially in the logistics and transport sectors, are increasingly worried about oil prices, which may increase to levels that will seriously affect their operations.

If the government decides to allow domestic diesel prices to exceed 30 baht a litre, it will deal a blow to the economy, he said.

The Prayut Chan-o-cha administration is using the Oil Fuel Fund and a cut in the diesel excise tax to control the retail price of diesel.

However, money in the Oil Fuel Fund is running low, causing authorities to seek a 20-billion-baht loan from commercial banks and a 10-billion-baht provisional loan to support the price subsidy programme.

A measure to halve the diesel excise tax, usually set at 5.99 baht a litre, expires in three months.

“We understand the government may not maintain the diesel price control because global oil prices may skyrocket to $300 a barrel if Russia closes its gas pipeline or does not export oil to Europe,” said Mr Kriengkrai.

European countries depend largely on oil and gas supplies from Russia.

The FTI earlier suggested the government redesign the domestic oil price structure by thinking carefully about the negative impact of its budget and the cost of living.

The federation also asked the government to consider seeking an additional loan of 1 trillion baht to support the Oil Fuel Fund and its stimulus packages.

The government has also been urged to look into the impact on fertiliser imports after Russia, the world’s biggest exporter, decided to ban sales of fertiliser overseas, said Mr Kriengkrai.

Thai fertilizer importers will subsequently increase the price of fertilizers over the next 1-2 months, causing more headaches for the agricultural sector, he said.

The FTI reported on Thursday a decrease in the Thailand Industry Sentiment Index (TISI) to 86.7 points in February, down from 88 points in January, thanks to a drop in turnover in the manufacturing sector.

The February TISI, which was based on a survey of 1,242 enterprises across 45 industries, saw high energy prices become the primary concern, with 75.2% of votes, following by the pandemic (68.5%) and a sluggish domestic economy (56.8%).