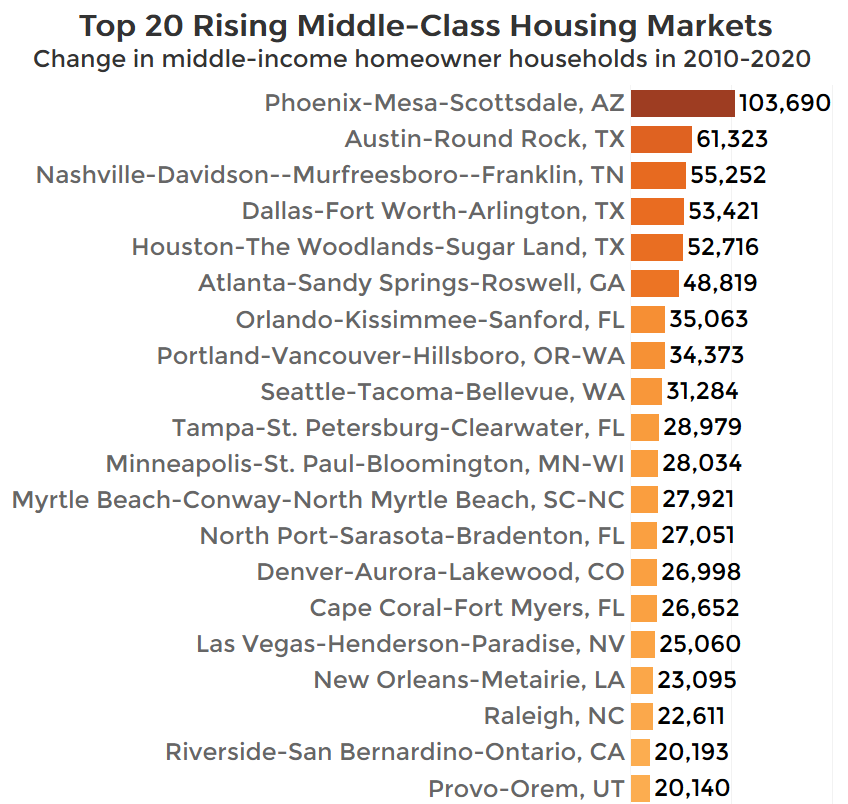 Middle-income households saw the most dramatic slip in homeownership rates in the past decade, falling from 78% in 2010 to 70% in 2020, a new report has found.

NAR defines “middle-income” households as those with incomes of over 80% to 200% of the area median income.

Among homeowners, both low-income and middle-income earners lost ground, comprising a smaller fraction of the homeownership pie in 2020 compared with 2010. Meanwhile, a much larger chunk of high-income earners became homeowners in the same decade.

“The study showed that it was the upper-income earners who benefited the most during this decade,” says Gay Cororaton, the report’s lead author and the director of Housing & Commercial Research at NAR told USA TODAY. “This was a decade following the Great Recession where you saw a lot of homes being foreclosed, and it took nearly 10 years for the unemployment rate to get back from the pre-Great Recession period.”

SPRING BUYING: Spring is in the … housing market? Home prices are surging early this year. Here’s why.

The study, Housing Wealth Gains for the Rising Middle-Class Markets, examines the distribution of housing wealth between 2010 and 2020 across income groups and in 917 metropolitan or micropolitan areas.

Rising middle-income class housing markets are identified by the NAR as those that had the largest increase in the number of middle-class owner-occupied housing units in 2020 compared with 2010.

While housing wealth grew among all income groups, low- and middle-income households ultimately received a smaller share of the gains. The study found that of the $8.2 trillion amassed in housing wealth from 2010 through 2020, high-income homeowners claimed roughly 71% of all wealth accumulation.

“Owning a home continues to be a proven method for building long-term wealth,” says Lawrence Yun, NAR chief economist. “Home values ​​generally grow over time, so homeowners begin the wealth-building process as soon as they make a down payment and move to pay down their mortgage.”

From 2010 through 2020, 58% of metropolitan and micropolitan areas gained middle-income homeowners.

Middle-income households in these growing markets have seen big gains in price appreciation.

For instance, as of the fourth quarter of 2021, the largest price gains (as a percent of the purchase price) over the preceding decade were in Phoenix-Mesa-Scottsdale (275%), Atlanta-Sandy Springs-Roswell (275%) , Las Vegas-Henderson-Paradise (252%), Cape Coral-Fort Myers (234%) and Riverside-San Bernardino-Ontario (208%).

Nationally, a homeowner who purchased a typical single-family existing home 10 years ago at the median sales price of $162,600 is likely to have accumulated $229,400 in housing wealth. Of this wealth gain, 86% can be attributed to price appreciation, with the median single-family existing-home sales price rising at an annual pace of 8.3% from the fourth quarter of 2011 through the fourth quarter of 2021, the study says.

Escalating home values ​​in metro areas such as New York and Los Angeles in the last decade made affordability a big issue for middle-income wage earners, pricing them out of the home-buying process.

“Either the middle-income earners could not afford to buy a home or they migrated into other more affordable areas,” Cororaton says. “We certainly saw a lot of out-migration in New York.”

Swapna Venugopal Ramaswamy is the housing and economy reporter for USA TODAY. Follow her on Twitter @SwapnaVenugopal

This article originally appeared on USA TODAY: These housing markets are creating wealth for the middle class