A view of the nickel electrolysis workshop at Kola Mining and Metallurgical Company (Kola MMC), a unit of Russia’s metals and mining company Nornickel, in the town of Monchegorsk in the Murmansk region on February 25, 2021. Photo: VCG

Click here to stay tuned with our live updates on Ukraine tensions.

The ramifications of the West’s sanctions against Russia appear to be expanding, as shortages of nickel, a crucial raw material for making stainless steel and batteries for new-energy vehicles (NEVs), continue to worsen and could soon hurt downstream industries, Chinese industry analysts said on Tuesday.

On Monday, nickel futures prices reached a record high on the London Metal Exchange (LME), exceeding the $100,000-a-ton level for the first time ever. The LME on Tuesday announced that it had closed the nickel market following further unprecedented overnight increases in the 3-month nickel price. 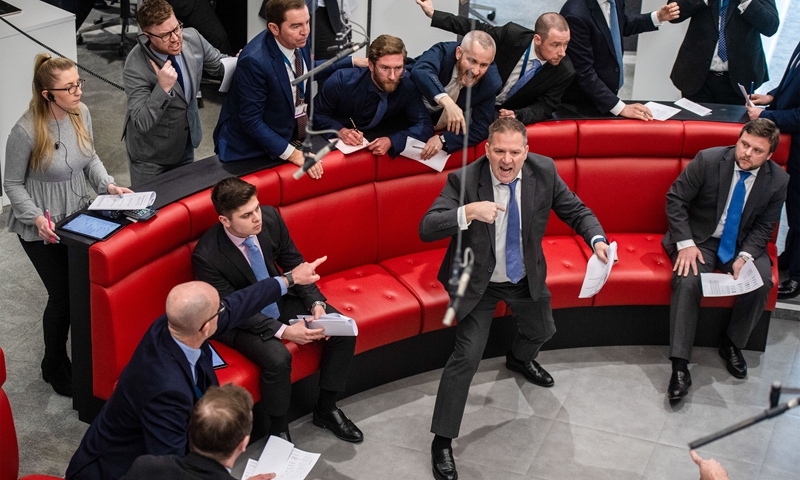 Traders, brokers and clerks on the trading floor of the open outcry pit at the London Metal Exchange (LME) in London, UK, on ​​February 28, 2022 Photo: VCG

Affected by the LME, the main nickel contract on the Shanghai Futures Exchange (SHFE) closed at the daily limit high of 228,810 yuan ($36,220.6) per ton on Tuesday.

Such unusual fluctuations are due to Western sanctions against Russia, including removing Russian banks from SWIFT, Wang Yanqing, an industry analyst with China Futures, told the Global Times on Tuesday.

In response to market fluctuations, the SHFE issued warnings three times from February 23 to Monday, telling participants to consider risks, invest rationally, and maintain the smooth operation of the market.

In the short term, the supply of pure nickel in Europe and the US will be tighter, Wang Cong, an analyst with the Shanghai Metals Market (SMM), an industry news portal, told the Global Times on Tuesday.

“Even though the domestic nickel market is not as tight as in the US and Europe, in the next one to two weeks, the supply will be tightened as domestic inventories are running short,” Wang Cong said, noting that although there are still profits for exporting nickel, traders have basically nothing left to deliver because of the short supply.

China’s nickel reserves are relatively small, accounting for only around 3 percent of the global reserves, mainly distributed in Northwest China’s Gansu Province, according to media reports. Due to its limited domestic resources, China imports nickel from countries such as the Philippines and Indonesia.

High prices and short supplies will eventually hurt downstream users worldwide, such as the NEV sector and some downstream plants have already planned to reduce production, according to industry insiders.

“There are discussions about using alternative currencies such as the yuan for nickel trade between China and Russia,” Wang Yanqing said.