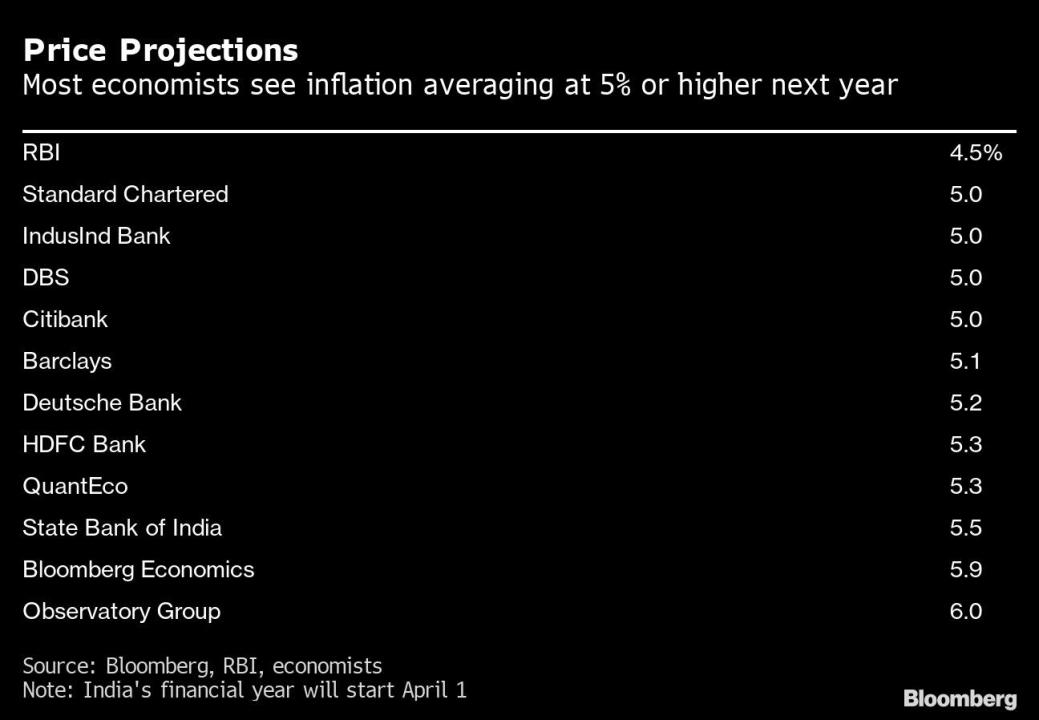 (Bloomberg) — The impact of the war in Ukraine on global supply chains could force India’s central bank to raise its inflation forecast, but may leave little scope for it to tighten monetary policy amid a deteriorating global growth outlook, according to economists.

The surge in edible and crude oil prices are bound to feed into headline inflation, which has already breached the upper tolerance limit of the Reserve Bank of India’s 2%-6% target range. While the RBI has blamed supply side shocks for the spike, higher prices will nevertheless eat into disposable incomes of consumers, the backbone of the economy that has yet to fully start spending after the pandemic.

“This is the policy maker’s nightmare — risk of persistent inflation, alongside a very uneven and unsatisfactory growth,” said Ananth Narayan, senior India analyst at Observatory Group, an economic and political advisory firm.

With crude prices over $100 a barrel and amid geopolitical uncertainty, Narayan sees it possible for retail inflation to average 6% next fiscal year beginning April — instead of the 4.5% forecast by the RBI. India, which relies on imports to meet about 85% of its oil needs, is expected to let pump prices rise once key state elections wrap up this month.

“Inflation numbers purely based on oil prices could head higher if the government decides to pass on even half of the impact,” said Soumya Kanti Ghosh, an economist at State Bank of India.

A 10% increase in retail prices of gasoline, diesel and liquefied petroleum gas could result in a 50 to 55 basis point rise in headline consumer prices over the course of a year, according to estimates by Saugata Bhattacharya, chief economist at Axis Bank Ltd.

Still, the central bank may stay away from raising interest rates as it reconciles its roles of fighting inflation, supporting growth and managing the government’s debt issuance. Russia’s invasion of Ukraine is a risk to India’s budget math, as it could upset the government’s plan to raise funds from assets sales while possibly forgoing some revenue to spare consumers the burden of costlier crude.

Any excise levy cut to cushion the impact on retail fuel prices could undermine the government’s fiscal deficit goal, which was worked out based on oil in the range of $70-$75 a barrel. Those calculations are now out of the window with Brent touching $139 a barrel Monday. Prime Minister Narendra Modi’s administration is also rethinking the timing of its proposed share sale in Life Insurance Corp., which could crimp revenue and enlarge the budget gap that’s already one of the widest in the world.

Although India has, for now, ruled out borrowing more this fiscal year to bridge the gap, its debt plan for the year beginning April 1 is at a record, making cheaper interest rate an imperative.

“Sharp rise in energy prices and pass through impact of other commodity prices will create more challenges for growth-inflation dynamics,” said Soumyajit Niyogi, associate director at India Ratings and Research. “Though the global central banks could still go for monetary tightening, domestically RBI is expected to continue with wait and watch policy.”

Costlier crude could also widen the deficit in the nation’s current-account, the broadest measure of trade, and weigh on the local currency, which already declined to a record low on Monday.

“Any persistent rupee depreciation due to widening trade deficit and Fed tightening, could be another source of imported inflation,” said Gaurav Kapur, chief economist at IndusInd Bank Ltd.

The crude oil price shock can shave off as much as 60 basis points of economic growth in India, according to Anubhuti Sahay, Mumbai-based South Asia chief economist at Standard Chartered Plc.

But crude isn’t the only problem. Record cooking oil prices in global markets are complicating the job of policy makers. The sharp rise in prices of commodities has started seeing into domestic prices, with cooking oil prices, particularly sunflower oil, rising by as much as 25 rupees (33 cents) a liter. Ukraine and Russia account for about 80% of world sunflower oil cargoes.

Despite price pressures, the RBI has maintained an accommodative stance to support growth, drawing criticism from some quarters that it could fall behind the curve. Jayanth Rama Varma, the lone dissenter among India’s monetary policy setters, has said the central bank’s inflation-targeting credibility is at risk if it keeps policy loose for too long.

Governor Shaktikanta Das, however, said in a speech Friday that the RBI has acted in line with its domestic growth-inflation dynamics.

(Updates with impact on government finances in the eighth paragraph and rupee in thw 11th.)