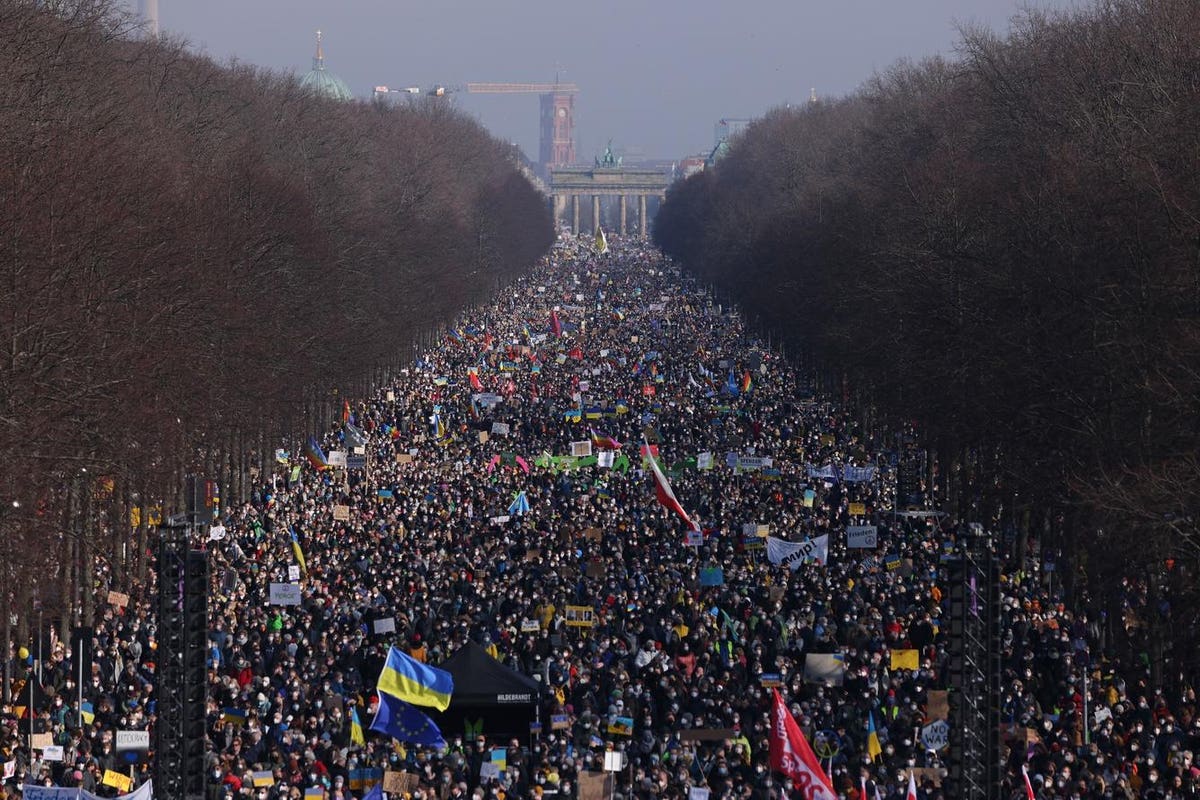 War Has Again Arrived In Europe

Day ten of the war and it appears that a called for ceasefire to allow civilians a corridor for escape from the Russian bombardment of Ukraine’s urban centers has failed. More than 1.5 million people have fled Ukraine to neighboring countries, the largest refugee crisis in Europe since the Second World War. Citizens of Berlin greeted Ukrainian refugees at the Berlin train station this week with offers of shelter and food, a poignant sight.

The leadership of Ukraine’s president Volodymyr Zelenskyy is an inspiration and the courage and pride of the Ukrainian people has evoked deep and profound feelings of solidarity with citizens around the world. Demonstrations across towns and cities around the world dominate the news with tens of thousands of protesters demanding an end to the Russian invasion.

In 1994 Ukraine gave up its nuclear weapons for recognition from Russia as an independent sovereign state. Following the Russian annexation of Crimea in 2014 and subsequent war in the Eastern Ukraine region of Donbas, this history does not bode well for nuclear disarmament or the reliability of treaties.

Reports of the demand for potassium iodide pills are emerging, sold out in many pharmacies in European cities, as fears of radiation poisoning from a nuclear attack intensify. Bottled water, water storage tanks, and tinned foods are rapidly disappearing from the shelves of shops.

People are starting to hoard cash for fears that e-money and crypto will be rendered useless in the event of mass power outages, loss of the internet, and the inability to use mobile phones to communicate with friends and family and keep abreast of vital news .

A dark cloud has descended on Europeans. War has arrived in Europe, again. It is only day ten, and leaders are suggesting to citizens that it is just beginning, it is likely to be long, and to prepare for the worst.

Over 600,000 crypto donations totaling over $80 million have poured in to the Ukraine in just over a week tracked by the Merkle Science dashboard for crypto donations. Most donations are in bitcoin and ether due to their ease of convertibility. A near unanimous Ukraine government voted last week to make cryptocurrency legal tenderand the many of the donations are going to fund the military effort.

Social media, the primary tool to have allegedly helped the Russian’s interference with US elections, appears to be redeeming itself in raising awareness of the war and attracting donations of all kinds. The Ukraine government’s prolific use of Twitter and social media to call to action governments, businesses, and citizens, to ask for support, is unprecedented, and at the heart of foreign public and private support for its war efforts.

Asking Elon Musk for access to Starlink to shore up internet communications, to command the blockchain and crypto community to digitally transcend borders, is all part of the ask.

“This is not just about crypto donations, the Ukraine government is actively reaching out to engage the blockchain community, with many big names pledging support like Ethereum Founder Vitalik Buterin, Bitfury’s Valery Vavilov, and Polkadot’s Gavin Wood.

As global sanctions hit Russia last week, seven Russian banks found themselves banned from SWIFTthe global inter-bank messaging system, effectively cutting the banks off from the global banking system. With sanctions imposed on the Russian Central Bank knocking out 60 percent or $388 billion of foreign exchange reserves, and lost access to over $400 billion of securities and brokerage in European banks, the hope is that the war effort will be slowed.

Central bankers Jerome Powell at the Federal Reserveand Christine Lagarde at the European Central Bankare calling for an accelerated path to regulating cryptocurrencies because of the crisis citing concerns of crypto being used for evading sanctions.

Carole House, Director of Cybersecurity and Secure Digital Innovation at the National Security Council at the White House, speaking at the GDF Summit, House said to the convened crypto community, “I want to emphasize the importance of working together to identify and disrupt illicit digital asset activity, including activity by Russians to evade sanctions. We encourage that virtual asset service providers leverage opportunities to share information with each other to better help defend your platforms from being used for illicit activity. Detect it, and then report it to authorities.”

Ari Redbord, the Head of Legal and Government Affairs Director at TRM Labs, and a former Treasury advisor, says“Crypto is not very useful for sanctions evasion at scale by Putin, the Russians, or the Russian Central Bank.”

Redbord, who has become a de facto leading industry spokesperson during the crisis, goes on to cite that the total size of the crypto market at $2 trillion, with its open, transparent, and immutable records, makes it and undesirable platform for evading sanctions on on a large scale. However, he warns, the industry must be vigilant.

House agrees saying, “The scale that the Russian state would need to successfully circumvent all US and partners’ financial sanctions would almost certainly render cryptocurrency as an ineffective primary tool for the state.”

A concern by many is that Russian oligarchs hit by sanctions have few places to turn, making cryptocurrency a go to choice. While a war might not be fundable with cryptocurrency, banks are on the front line as the money launderer vehicle of choice. Bad actors and terrorists are very experienced at exploiting the weaknesses and using all of the global financial systems for their purposes.

Greg Lisa, having experienced horrendous crime and terror violations while at FinCen, the DoJ, and as a lawyer at Hogan Lovells, is now Chief Legal Officer at Element Finance. Says Lisa, “The crypto industry needs to be trusted and seen to be taking the issue of sanctions seriously, and not seen as a fringe movement. Bad guys are innovative too, if you squeeze a balloon, the air just moves to another part of the balloon.”

elliptical noted in a report this month, “Iran is using bitcoin mining as a way to monetize its energy reserves, while North Korea is believed to be stealing cryptocurrency to support its missile development program.”

Being On The Right Side Of History

The crypto industry’s response to the crisis is varied. With over 400 crypto exchanges in the world, it is a highly fragmented global industry, and getting it aligned is like herding cats, or perhaps crypto cats. Many point out the industry has a PR problem, especially with policymakers and lawmakers.

“Bitcoin can’t finance a war, but the crypto industry needs to be seen to be on the right side of history,” says Sir Julian King, an advisor to Flint Global, and the last British European Commissioner serving up until Brexit.

While the exit from Russia of brands like Apple, Nike, and Ikea is very visible to the public, it is the energy sector that is likely to have the largest economic impact on Russia with exits announced from Exxon, Shell, BP and Equinor.

Crypto is a technology, and as such is politically neutral. We project political principles onto it based on our own bias and opinion. Libertarian values ​​in a free world with a free market is one thing, but in the face of a war, principles need to develop to reflect the needs of defense support for victims of war, and open collaboration with policy and lawmakers.

Inflammatory rhetoric about libertarian values ​​in the face of a breach of international borders by an aggressive state does not often sit well with lawmakers, looking for further justification to regulate technologies that they may not fully understand, but view as obstructive to national security. All is fair in love and war.

House adds on working with the community, “Through this and other private-public partnerships, as well as partnership with the international community, the US Government will continue to work together with the digital asset community to identify and disrupt illicit cryptocurrency activity.”

Most of the larger global exchanges conduct Know Your Customer (KYC) and Anti-Money-Laundering (AML) checks and have sophisticated market surveillance tools including sanctions screening tools. They also process the transaction volumes that make up the lion’s share of the global crypto market and are on deck to help inform and support policymakers and security forces with the implications and implementation of sanctions for the crypto industry.

There is a strong commitment in industry to best practices and to working to meet regulatory requirements as frameworks and treatments for cryptoassets develop globally. Members of GDF who have certified to the GDF Code of Conduct attests to their commitment to best practices, including taking necessary measures to detect, identify, and deter sanctions evasion.

Market surveillance solutions like Solidus Labs, Elliptic, TRM Labs and Merkle Science are all on deck to support with sanctions monitoring and reporting. Chainalysis offers its six step guide for exchanges to help meet the sanctions obligations.

The industry needs to consider how it further publicly demonstrates that it will work with agencies to ensure that platforms are not misused for sanctions evasion. We have seen some industry players, such as FTX’s CEO Sam Bankman-Friedtake the lead in making their position on sanctions clear, and working with law enforcement on ensuring that their platform is not misused for sanctions evasion.

The community – and particularly those who bemoan an unfair public image of crypto as nothing but heedless, anti-establishment, and speculative trading – are offered a moment to prove themselves. The non-military approach to fighting Russia’s aggression towards Ukraine requires a global, cross-industry, united effort.

Crypto faces its most crucial test yet: can it mobilize its libertarian roots to demonstrate to regulators and law enforcement the wider capabilities and benefits of crypto and digital assets? As House says, “We are on the frontlines of this fight, with the ability to identify and report sanctions evasion.”

In my discussions with leaders in the global crypto and digital assets sector, I am encouraged by the response of many to convene the community and put themselves at the service of the NSC (Treasury, OFAC, FinCen, the DoJ), European, and global government policymakers and sanction enforcement agencies, including the Financial Action Task Force (FATF).

The GDF community has set out to further enhance its Codes of Conduct for sanctions by developing a global security code of conduct with best principles and practices published online in a sanctions hubwith links to the resources and networks that crypto and digital assets firms can access to ensure they are getting support, and meeting their obligations.

This is an open public resource, GDF is a not-for-profit organization, and this CALL TO ACTION is open to everyone in the global crypto and digital asset community that wishes to join in and contribute to the sanctions knowledge base and tools. Just DM me.

In discussions with crypto industry leaders, I have been struck by a singular unity of the solution to the crisis – STOP THE WAR.