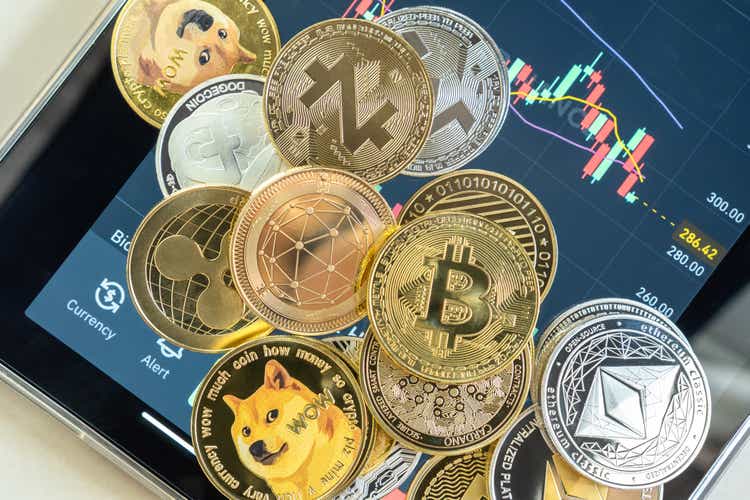 Eric Lipton and Ephrat Livni, writing in the New York Timesgive is a picture of reality that we all need to absorb and learn from.

The title of their article is “Reality Intrudes on a Utopian Crypto Vision.”

The gist of their article is about how innovations can create an opening for many to test the new space produced by an innovation and test the market to see just what might make money.

And, there is no reason why the innovation cannot create opportunities to cheat, escape regulation, and to get away with what one can get away with.

There is no reason an innovation cannot be used for “inappropriate” purposes.

“Ventures based in the digital world, he added, are connected to the real world. ‘And laws and regulations,’ he said, ‘are going to need to apply.'”

This is the way the creative world works.

This is the way markets work. It’s just that after the final innovations are embedded in the resultant outcome, all the other efforts to modify or use the innovation are generally forgotten.

All that remains is the resultant outcome.

But, Lipton and Livni examine the whole process taking place in the innovative boom connected with cryptocurrencies.

The world encompassing the “crypto vision” includes no owners, no officers, or no employees.

This world produces a “decentralized autonomous organization” or a DAO, that “is supposed to be steered automatically by computer code and governed by a community of users who vote on proposals with crypto tokens”

This is the new model of commerce. There is no “centralized power” that imposes itself on the organization.

The controller of this enterprise is a democracy of users.

But, the “crypto vision” is very philosophical in nature and, more specifically, libertarian in content.

One pundit has captured the situation by arguing that the “crypto vision” is more a vision of philosophy than it is of economics. Thus, the defense of the approach always tends to be more idealistic than realistic.

And, this is where all the trouble is coming from.

How Does It Work?

The emergence of innovation can cause substantial disruption and distraction.

That is, the traditional way of doing things is upset and the system must respond and build the new system that will eventually emerge. But, a lot of uncertainty and chaos can result as people search to find their way into the “new” era.

The supporters of the DAO argue for this “new model for commerce” is one that “could democratize business enterprises and break the hold that Big Tech and other entrenched middlemen have over innovation in the information age.”

However, there is a problem, and this is what Lipton and Livni discuss in greater detail.

And, this is where the economics of the situation comes into play.

And, this has led to the question, “Are these ventures simply vehicles to enrich insiders and exploit consumers, or early experiments in a new way of doing business.”

The reason: “Mant DAOs are wrestling with challenges, including huge financial losses from software flaws and hacks, internal divisions that threaten some entities’ continued existence, and allegations of improper diversion of community funds. Others have struggled with low turnout among members when it comes to voting on a strategy or business decision, effectively leaving control in the hands of the investors who put up money to help start them.”

The phrase “Ponzi scheme” keeps coming up in discussions,

For more specific detail and explicit cases, interested readers can go to the Lipton/Livni article.

The Regulation Is Coming

There is absolutely no doubt that these markets are going to be regulated.

The regulators just need to decide what these assets are all about. Are they commodities, as the Commodity Futures Trading Commission has claimed?

What role does the Federal Reserve System play in this picture?

And, what about the US Congress…where do they stand?

The White House is even getting into the picture.

And, events in this space are going to accelerate.

So, regulation is coming. How far will it go?

One can look at China for one solution.

China has banned all Crypt-solutions in this space.

China has a very, very strong and extensive digital payment system and now has a central bank digital currency, the eYuan or the eCNY.

And, this is certainly one way to go.

There is a very real question about what cryptocurrencies really do.

Satoshi Nakamoto, the ‘creator’ of Bitcoin, argued very strongly that Bitcoin was a medium of exchange. This was its “productive” attribute.

However, things have not worked out quite the way desired, as Bitcoin does not seem to experience much traffic as a medium of exchange. It has not become a “risk-off” asset as can be seen in the recent market events.

Lael Brainard, Biden-appointment for Vice-Chair at the Federal Reserve, has recently stated in a speech that the correlation coefficient of Bitcoin with the S&P 500 stock index is 0.56. That is the price of Bitcoin is highly corrected with movements in the stock market.

This was not the behavior that Mr. Nakamoto was looking for.

Bitcoin, seemingly, has no productive qualities.

Thus, people question whether or not it should even be around.

The Chinese decided to eliminate it in China.

What will the American government do going forward?