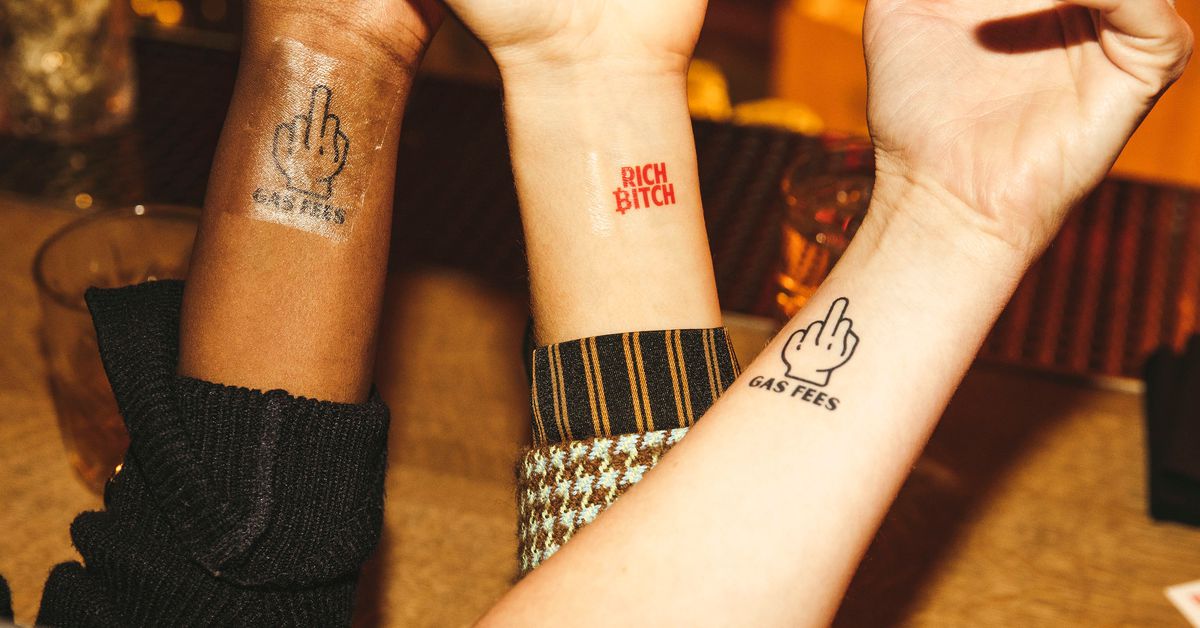 “Whether we like it or not, it’s happening,” the woman with the microphone is saying. “I know it feels really fringey right now, but in, like, three minutes we’re going to be living in this world.”

I’m one of about a hundred women in their 20s and early 30s with the kind of professionally cool haircuts you can only get at salons with big Instagram followings, in a dimly lit, rather swanky hotel bar in Manhattan. We are here to learn about the looming future of which our host speaks, the future that is paved with blockchain, NFTs, cryptocurrency, and, maybe, riches. Right now it is dominated almost entirely by men, but, we’re told, it doesn’t have to stay that way.

The woman with the microphone is Deana Burke, the 37-year-old co-founder of Boys Club, one of a handful of startups organized around the concept of bringing more women and nonbinary people into this space, which I’ll broadly refer to as Web3, or the still nebulously defined “next phase” of the internet. It’s the version of the internet that comes after the Facebooks and the Googles, the one where you, the user, can theoretically own your data — your art, your tweets, your selfies — and earn money from them. The infrastructure of Web3 runs on something called blockchain that in theory allows for a perfectly transparent, completely public record of every transaction that happens on the internet (here is a much more in-depth explainer). As you are likely aware, it is also controversial.

The real reason we are all in this bar, though, is because when people talk about Web3 and blockchain and NFTs, what they are really talking about is money, and the possibilities of making a lot of it in a short amount of time. Over the past several years, and particularly during the pandemic, cryptocurrency has gone from a relatively niche interest among tech bros to, many have argued, the Great Way Forward. (Many have also argued the oppositeand we’ll get to that.) The problem is that most of the crypto success stories the media tends to repeat are from men who, by all accounts, were already rich.

“We’re not really trying to convince people about crypto or NFTs,” explains Burke, who has worked in the crypto space since 2017 and met her co-founder Natasha Hoskins, 29, at a previous job at IndieGoGo. Instead, they want Boys Club to act as a “soft landing” for women who are curious about the space and need somewhere to ask questions. “One thing that makes us different from other crypto communities I’ve been involved with is that the people who are coming to Boys Club are, like, poets, florists, academics,” she adds. ”They’re trying to figure out how their acupuncture business could move into this Web3 world.”

The community exists mostly, like the vast majority of Web3 groups, on Discord, where its 800 members discuss topics in chats called things like “no dumb questions,” “spam watch,” and “DAO daddies.” One recent topic in the latter chat: How to know if you’re working with someone who’s actually qualified if you only know their Discord handle.

You’ll quickly learn there are a lot of acronyms in this space; DAO, for instance, stands for “decentralized autonomous organization” and is pronounced like it’s spelled. Think of DAOs like companies where each person involved has a certain amount of shares and therefore voting power to make decisions on what the DAO will do, except it’s all based on crypto and the blockchain. Boys Club itself is in the process of becoming a DAO through an accelerator called Seed Club, and Hoskins and Burke are exploring what the organization could become. A tool for recruiting women in Web3? A start-up investment firm? “The community-first mentality is very crypto,” explains Hoskins. “The currency that is the most valuable is the people you have in your Discord.”

These are the same people at the Manhattan event, where there are free temporary tattoos that say “Rich Bitch” (the B is a play on the bitcoin logo) and “Lil Degen” (short for “degenerate,” a common slang for crypto traders and gamblers). On the cocktail rounds sit free sponsor-supplied hats from Public.com that say “INVEST” in all caps; the stated dress code for the evening is Euphoria meets Julia Foxwhich translates to lots of tiny going-out tops, bright patterns, and oversized pants.

The main event is the panel discussion, where Hoskins interviews four women involved in Web3: Isabella Arnaofounder of the crypto community WomenInNFTS; Fadumo Osman of the investment app To come up; Maggie Lovefounder of SheFi, which aims to educate women on DeFi, aka decentralized finance; and Justine Humenansky of the “learn-to-earn” platform Rabbithole. “This is the first time in history that, at the beginning of a building industry, women and marginalized communities can participate in numbers,” says Arnao. “I don’t take that lightly. We’re Steve Jobs in his garage right now.”

Six months ago, Hoskins didn’t even have a crypto wallet. It was Burke who finally convinced her to start taking Web3 seriously. By late October, they hatched a plan to invite a handful of friends over to Hoskins’s roof in Brooklyn for natural wine and crypto talk, but after sending out a tweet about it, dozens more expressed interest in attending. About 55 people showed up at the first Boys Club event, held in a Chinatown loft in November. The second was last week.

Most of the panel discussion was devoted to the basics: What is a token, how do I start investing. While answering the question “what is the metaverse,” Love discusses the digital real estate parcel she bought in the Mona gallery, a metaverse art project, where she can throw DJ parties and community gatherings. “Even if we don’t want to live in the metaverse, it is the next investment opportunity,” she says. “The only people I’ve ever seen lose in crypto were like, ‘NFTs? I’m above this. That’s such a silly idea.’ Nothing is silly. The world is absurd. The metaverse is the next thing.”

Interest in personal finance has surged during the pandemic, and in the same time span crypto (did you catch, uh, the Super Bowl?) has gone mainstream. Sixteen percent of US adults say they’ve started investing in it, according to a Pew Research Center study, particularly men between the ages of 18 and 29. Twice as many men as women invest in crypto, according to a CNBC survey, exceeding the gender gap in individual stock trading, mutual funds, bonds, and real estate. People of color, however, many of whom have been excluded from the traditional financial system or are unbanked, have embraced crypto on a larger scale; a Harris poll survey showed that 23 percent of Black Americans and 17 percent of Latino Americans own crypto, while just 11 percent of white Americans do.

What the Boys Club panel didn’t discuss, however, were some of the more existential questions around Web3, such as whether it should exist at all. One well-documented example: Bitcoin requires more electricity to mine than is used yearly by the nation of Finland. Ethereum, too, guzzles lots of energy through its complex security system. (Because it uses so much energy, you have to pay a “gas fee” for every ethereum transaction you make. One of the free temporary tattoos at the event was a middle finger over the words “GAS FEES.”)

There is also the widespread accusation that the promise of getting rich on crypto is fundamentally a pyramid scheme. The Financial Times has argued that it is “worse than a Madoff-style Ponzi scheme,” and as Jacobin magazine points out, “Given that cryptocurrencies don’t produce anything of material value, this enormous waste of resources renders the whole enterprise a negative-sum game. Investors can only cash out by selling their coins to other investors.” While the majority of it-happened-to-me stories about NFTs and crypto are about people who got rich, there are plenty more that tell a different story, one that frames the world of crypto trading as nothing more than high-risk gambling. Web3 people have an acronym for this attitude: FUD, which stands for “fear, uncertainty, and doubt.” Nobody wants to be the one spreading FUD.

I wondered why, in front of a room of newbies and at least a few skeptics, the panel discussion shied away from these sorts of questions. “We read the questions that people texted in,” Hoskins explained. “It wasn’t intentional.” One of Boys Club’s upcoming events, she said, is focused on the topic of Web3 and climate.

As for the other question, one way to look at it is to imagine if this room full of young professional women with disposable income existed in 1997, when Amazon went public. Would you tell them to invest everything they could because you knew someday they’d get rich? Or would you warn them against it because of the myriad ways in which the company has made the world a worse place, and that their dollars could be better used elsewhere?

I know what I would have done. (Gotten rich! Obviously!) But it is difficult to ignore the similarities between the language of women-in-crypto initiatives and that of, say, multilevel marketing companies, which target women and people of color on promises of getting rich quick while circumventing the traditional systems they’ve been excluded from. Both run on FOMO: In MLMs, you’re guaranteed to make more money if you join early; with crypto, the price of currencies and NFTs can skyrocket or crash in a matter of minutes, and investors often feel like they’re always one step behind. The only way to assure that they won’t miss out is by constantly watching the markets.

So what’s a feminist crypto collective to do? Attempt to build some kind of Web4 to replace the reliance on crypto, blockchain, and also the entire global financial complex, a system that is committed to diversity and inclusion and equality and doesn’t also produce millions of tons of carbon dioxide? Or meet the finance bros where they are and beat them at their own game?

Boys Club doesn’t need to convince me that crypto presents an opportunity. Of course it does! People are going to get rich, and some of them will be women! “More female and nonbinary billionaires!” says one panelist, to laugh and applause. But there is no easy solution to the uneasiness that lingers after you sense that the big boat is about to hit the iceberg, and the only way you might survive is to steer right toward it.

This column was first published in The Goods newsletter. Sign up here so you don’t miss the next one, plus get exclusive newsletters.