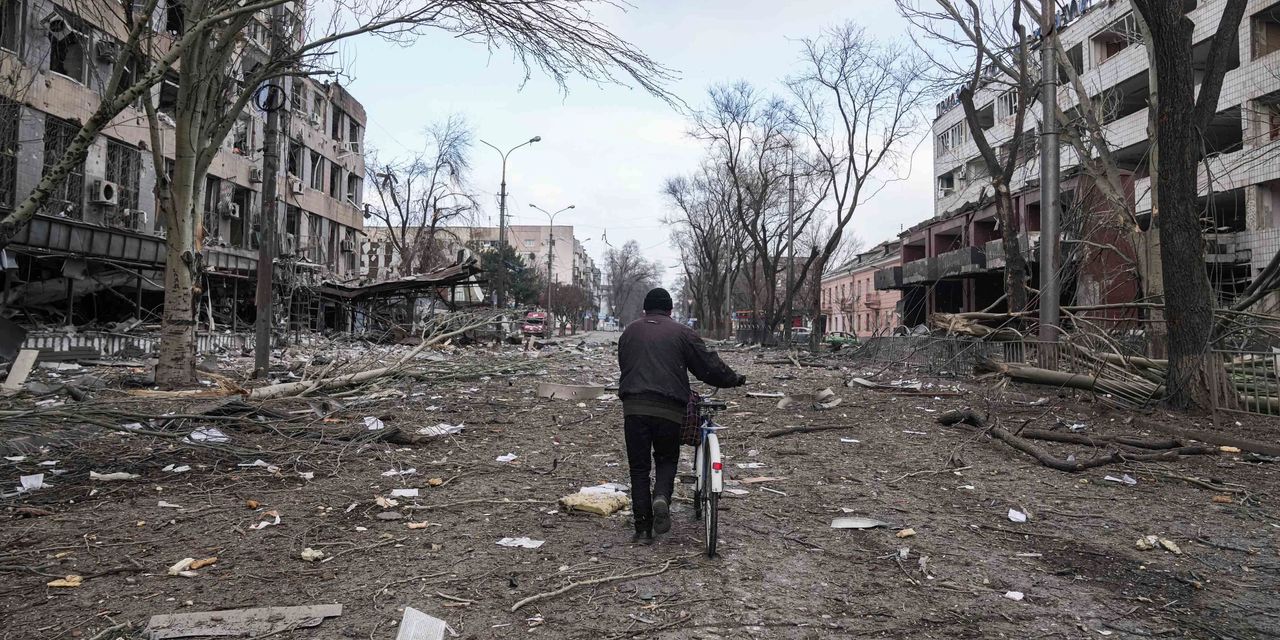 US stocks closed lower Friday, with all three major benchmarks booking another week of losses, after President Joe Biden called for a suspension of normal trade relations with Russia as part of sanctions designed to economically isolate Moscow for its unprovoked attack in Ukraine.

How did stock benchmarks perform?

For the week, the S&P 500 lost 2.9%, while the Dow slid 2% and the Nasdaq dropped 3.5%. The Dow has seen five straight weeks of losses, its longest losing streak since the stretch ending May 31, 2019, while the S&P 500 and the Nasdaq each booked a second consecutive week of declines, according to Dow Jones Market Data.

US stocks sank Friday as investors remained focused on headlines tied to Russia’s ongoing invasion of Ukraine that began more than two weeks ago.

Biden called for an end of normal trade relations for Russia over its invasion of Ukraine and acknowledged the economic hardship the world will endure as it aims to isolate Russia by revoking its most-favored nation trade status, which the president says will make it even harder for Moscow to do business. Biden said Western nations were showing restraint to avoid starting World War III.

Stock-index futures spiked overnight after President Vladimir Putin told his Belarusian counterpart, Alexander Lukashenko, that there were “positive” shifts in Russian talks with Ukraine, according to a meeting transcript provided by the Kremlin and reported by Russian news agency Interfax. However, Ukraine’s foreign minister, Dmytro Kuleba, said he didn’t see any progress in Russian-Ukrainian talks, in an interview with Bloomberg.

Putin’s upbeat comments cam as Russian forces launched new strikes on airports in western cities on Friday, and Kyiv continued to brace for an onslaught.

This morning the market appeared to be “trying to latch on to anything” that might point to “a resolution of some of the acute fighting that’s taking place,” said Ma. But that still seems “a ways off” considering events on the ground , he said.

Major US indexes suffered another week of losses, as investors grappled with the continuing Russia-Ukraine war. Technology stocks in particular have suffered as bond yields have climbed steadily this weeksuggesting that worries about inflation and coming central bank interest-rate increases hold a greater sway with markets than the likely impact of the Ukraine war.

The Federal Reserve will hold its first policy meeting since the conflict began next week, with analysts widely expecting a rate increase of around 25 basis points, amid mounting fears that the central bank may push the economy into a recession as it combats inflation pressures.

“Before the Russia invasion of Ukraine some market pricing was suggesting we might see 7 rate rises this year, and while some are suggesting that might not happen now, there is an argument that it might be the lesser of two evils,” wrote Michael Hewson , chief market analyst at CMC Markets, in a daily note.

“The transitory (inflation) playbook seems so last year now with the Fed having to balance the risks of tightening too quickly and tipping the economy into recession or allowing inflation to do it for them by letting it rip,” he wrote.

Goldman Sachs has cut its US economic growth forecast, citing the effects of higher oil prices and the conflict on European soil. West Texas Intermediate crude for April delivery rose 3.1% Friday to settle at $109.33 a barrel.

In US economic reports, data from the University of Michigan consumer sentiment survey showed a fall to an initial March reading of 59.7 from February’s level of 62.8. It’s “reflective of how much inflation is weighing on consumers,” with the increased cost of living starting to strain budgets, according to BMO’s Ma.

The consumer sentiment survey showed expectations for inflation over the next year rose to 5.4%, from February’s expectation of 4.9%, marking the highest level since 1981. Inflation expectations over five years held steady at 3%. The findings come after consumer price data released Thursday showed US February consumer prices pink to 7.9%a 40-year high, and some see that worsening due to the Russia-Ukraine war.

“There’s been a lot of flux between, is it going to be a protracted ground conflict or is it going to be a quick resolution?” said Michelle Cluver, portfolio strategist at Global X, in a phone interview Friday. “It feels a lot like the market each day is trying to assess which way it’s going to lead.”

Which companies were in focus?

How did other assets fare?

—Barbara Kollmeyer contributed to this report.