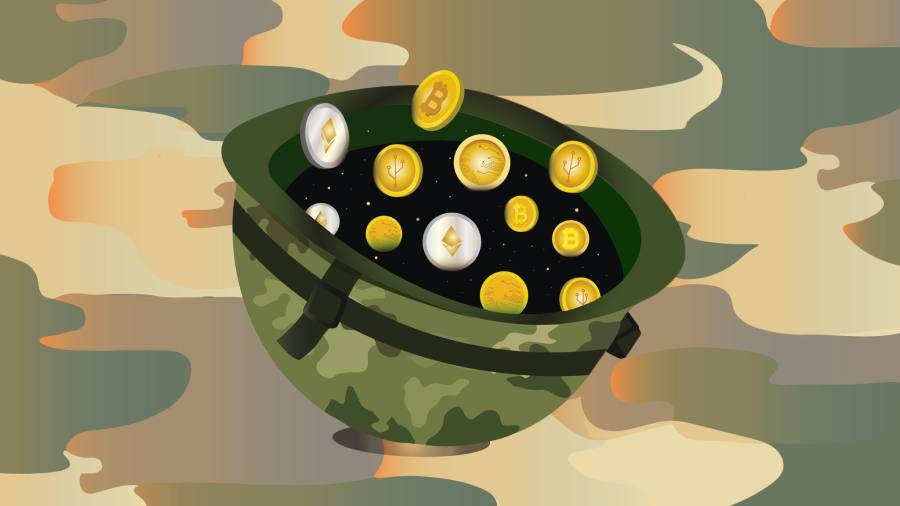 The Ukrainian government announced on social media last month that it would accept global donations made in bitcoin, ethereum and tether, to support its army.

It might have seemed like a publicity stunt. Not so. About $106mn of crypto donations have flooded in, if you tally up all the initiatives on different platforms, according to Brittany Kaiser, a crypto entrepreneur (and former whistleblower at Cambridge Analytica). She is part of a tech network helping Mykhailo Fedorov, Ukraine’s digital transformation minister, to organize this.

For context, this pot exceeds the initial €90mn of humanitarian aid to Ukraine announced by the EU (although Brussels is now increasing that) and will almost certainly grow, since Fedorov’s network is racing to tap every crypto tribe.

Gavin Wood, for example, the co-founder of ethereum, tweeted that he would “personally contribute $5mn” if polkadot, the token he created, was accepted, alongside the others. Coders responded and the central bank is now accepting numerous assets, including non-fungible tokens. “The innovation is amazing,” says Kaiser. “We haven’t seen anything like this before.”

What should the wider financial world make of this? Many traditionalists might scoff. Some regulators may also wince, given that American and European regulators are racing to prevent Russian companies and citizens using crypto to evade western sanctions. But it would be foolish for any investor — or policymaker — to ignore that $106mn pot. For one thing, it shows that we now live in a world that is shaped by networks, not just hierarchical institutions.

It is also a symbol of a bigger point: the war in Ukraine could be an accelerant for the crypto sector. “Russia’s invasion of Ukraine is the first major event where cryptocurrencies are part of the equation,” Bridgewater hedge fund told clients this week. “These shorter-term dynamics are occurring alongside structural changes in cryptocurrency markets that we believe are self-reinforcing, as adoption by key institutional investors increases and the surrounding ecosystem costs.”

Or as Michelle Ritter, chief executive of Silicon Valley tech company Steel Perlot, observed: “Social media’s hinge moment came in 2011, when videos, tweets and other posts from Libya, Egypt, Yemen, Syria, and Bahrain sparked the Arab spring . . . now . . . we find ourselves at a similar turning point [with cryptocurrency].”

There are two factors contributing to such predictions. One is that the invasion has occurred in a place that has been a hotbed of crypto activity and tech talent in recent years. The research group Chainalysis, for example, calculates that Ukraine had the highest level of crypto usage per capita in the world in 2020 and the fourth highest in 2021.

This has laid the ground for a tech-savvy network that is willing to innovate. It does not mean cryptocurrencies have been particularly useful as payment tools in the war as conventional channels have dried up, except for in making donations. While some western tech companies have tried to pay their employees in Ukraine in crypto, they tell me they have struggled to do so.

Nor has crypto been a particularly good short-term store of value; in recent weeks the price performance of bitcoin has notably underperformed gold, the traditional wartime store of wealth, Bridgewater notes. But, it adds, the “rising Russian and Ukrainian flows into crypto during this war highlight how cryptocurrencies are being seen and used as alternatives to fiat currencies”; innovation is likely to accelerate.

The second factor is that western sanctions on the Russian central bank have sparked fears that non-western countries will shun the dollar in the future. This is unlikely to topple the greenback’s status as the main reserve currency in the short to medium term — or, at least, not in a world where the European Central Bank is co-operating closely with the US, the Chinese currency is not yet freely convertible and the entire cryptocurrency world is a mere $2tn in size.

For the latest news and views on fintech from the FT’s network of correspondents around the world, sign up to our weekly newsletter #fintechFT

But the intensification of the debate is heaping pressure on the US government to respond, particularly given that China recently launched a digital currency of its own. Hence President Joe Biden taking a break on Wednesday from frenetic White House diplomacy on Ukraine — and efforts to curb spiraling oil prices — to announce the launch of the first American federal policy initiative for digital assets. The details are vague but include backing for the US Federal Reserve’s fledging efforts to develop a digital dollar.

It is highly unlikely that a digital dollar will become a reality soon, or that the Securities and Exchange Commission will suddenly embrace stablecoins or bitcoin funds. But the crucial point for investors to understand is that Washington increasingly wants innovation in this sphere to happen inside its regulatory tent, not outside — or offshore.

While this might horrify some libertarians, the bigger players in the crypto industry seem eager to engage with the establishment — and are racing to scrub up their image to make a good impression. In that sense, then, the explosion of crypto philanthropy for Ukraine is symbolic in every sense. Consider it as yet another example of how war can produce unexpected side-effects, not just in geopolitics but in finance, too.